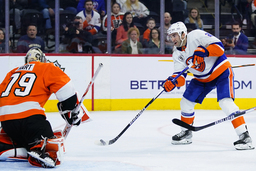 PHILADELPHIA (AP) A new Flyers era began with a victory.

Kevin Hayes scored both goals for Philadelphia and the Flyers beat the New York Islanders 2-1 Sunday in their first game since trading longtime captain Claude Giroux.

Joel Farabee and Travis Konecny each assisted both goals for Philadelphia. Interim coach Mike Yeo spoke to Farabee and Konecny prior to the contest about opportunities for each to raise their games with Giroux gone, and they both responded.

"They're not the followers anymore, they're the leaders," Yeo said.

Casey Cizikas scored for the Islanders.

"We didn't execute when we needed to," Islanders coach Barry Trotz said. "We were just not really sharp. Just didn't have enough juice."

Stuck in last place in the Metropolitan Division, Giroux waived his no-trade clause in the final year of his contract for a chance to win his first Stanley Cup with the Eastern Conference-leading Panthers. A large billboard on I-95 near the arena thanked Giroux for his time in Philadelphia, and many in attendance still sported No. 28 Giroux jerseys.

Giroux, who was drafted in the first round by the Flyers in 2006 and named their 19th captain on Jan. 15, 2013, ranks second in club history with 900 points. He joined Hall of Famer Bobby Clarke as the only Flyers to play in 1,000 regular-season games with the team in an emotional 5-4 comeback victory over Nashville on Thursday. The Flyers never were able to win a Cup with Giroux, though they did reach the finals in 2010 among his 85 playoff contests.

"He did a lot, and certainly upheld his end of the bargain," general manager Chuck Fletcher said before the game.

Tippett was in the lineup against the Islanders and had several near-misses to get his first point with the Flyers, clanging a hard wrister from the slot off the post six minutes into the second period and taking the initial shot but not getting credited with an assist on Hayes' second tally.

"Looks like a hockey player to me," Yeo said. "A great start for him."

The No. 10 overall pick in 2017, Tippett had six goals and eight assists in 42 games this season with Florida and 33 points over 94 career NHL games.

Tippett is looking forward to a fresh start and a new opportunity.

"Jumping right into it feels great," he said.

Although Tippett has an impressive beginning, many Flyers fans bemoaned the return for a franchise icon. Fletcher defended the trade, pointing out that his options were limited due to Giroux's full no-movement clause.

"He earned that right," Fletcher said. "I don't begrudge him anything."

Giroux was a staple on Philadelphia's No. 1 power play, accumulating 339 points on the man-advantage. That unit has struggled mightily this season, though, entering 30th in the NHL while converting on 13.6% of chances.

Hayes notched a rare Philadelphia goal on the power play with 5:05 left in the second to break a 1-all tie. Tippett's shot went off Konecny to Farabee, who set up Hayes from a similar spot as his first goal 4:22 into the second that tied it at 1.

The second tally gave Hayes seven points (four goals, three assists) in eight games since returning to the lineup on March 5 following the third surgery since last season to address an abdominal injury.

With Monday's trade deadline looming, both clubs rested players who could be moved. Islanders RW Cal Clutterbuck and D Andy Greene sat out, as did Philadelphia D Justin Braun. Flyers C Scott Laughton (head) missed his fifth in a row.