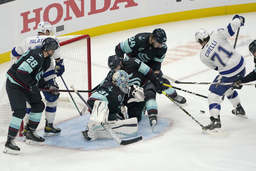 SEATTLE (AP) Victor Hedman scored twice to lead the Tampa Bay Lightning to a 4-1 victory against the Seattle Kraken on Wednesday night.

Nikita Kucherov and Anthony Cirelli also scored for the Lightning, who won their second straight to finish a six-game road trip - their longest of the season.

Steven Stamkos had three assists in his 900th NHL game.

"That was nice to do," Stamkos said. "I'm just proud I've been part of this organization for all 900 of those, and hopefully more to come."

Andrei Vasilevskiy stopped 24 shots for his 32nd win, most in the league.

Yanni Gourde scored his 14th goal for the Kraken, who have lost five of six and 12 of 14. Gourde, who played six seasons for Tampa Bay before being selected by Seattle in the expansion draft, also took over the Kraken team lead with 36 points.

Gourde gave the Kraken a 1-0 lead 2 1/2 minutes in, scoring a power-play goal from the right circle. It marked the fifth straight game Gourde had at least a point, his longest streak this season.

The Lightning tied it with 13:34 left in the first period. On a 2-on-1 rush, Stamkos' pass found Kucherov in position to hammer home the goal.

Tampa Bay went up 2-1 on a power-play goal from Hedman with about 11 minutes to go in the second. Once again, it was set up by Stamkos, who flipped the puck back to the defenseman near the blue line for a one-timer.

The Lightning extended their lead 23 seconds into the third. Brayden Point broke free for a breakaway that was stopped by Grubauer. But he slid well away from the crease, leaving an open net. After a scramble in front, Cirelli pushed in the puck.

"That was a great opening shift. We talked about not sitting back in the third and trying to command the puck," Stamkos said. "Couldn't have drew it up any better. Pointer just absolutely flying up the ice, creating that chance."

"Mass chaos in our crease. That's the one that put some separation there for them," Hakstol said. "We didn't really regain a push after that."

Hedman capped the scoring on a power-play goal with 5 1/2 minutes left, his sixth goal in the past six games.

"The main thing is getting points, that's how you get to the playoffs," Cirelli said. "I thought we did a great job battling these last two games and coming away with two big wins to end the trip."

NOTES: Seattle traded forward Calle Jarnkrok to Calgary for three draft picks. Jarnkrok has 26 points in 49 games this season. It is expected to be just the start for the Kraken, as captain Mark Giordano and forwards Marcus Johansson and Riley Sheahan could also be dealt before Monday's deadline. . The Kraken honored Giordano before the game, recognizing him for playing in 1,000 NHL games. It was the first home game since Giordano reached the milestone March 5 at Washington, but he was held out of the lineup to prevent injury. . Stamkos became the third player in Tampa Bay history to reach 900 games played. He trails only Vincent Lecavalier (1,037 games) and Martin St. Louis (972).