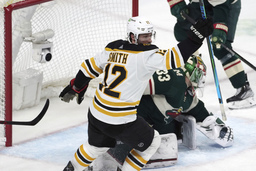 Ryan Hartman added an empty-netter, his 24th goal of the season, with 4.9 seconds remaining to seal the win.

After the Wild had a few good looks on net during a shift from their third line, Greenway beat a sprawling Jeremy Swayman from the slot at 7:56 of the third. It was Greenway's sixth goal of the season and second in two games.

The go-ahead goal was the payoff for a long shift by the line of Greenway, Joel Eriksson Ek and Marcus Foligno, who kept the pressure on the Bruins and held the puck in the offensive zone for an extended stretch before finally breaking through.

"It felt like we had eight chances to score," Greenway said. "We were trying to play pretty physical, like everything we always do. We stayed patient."

Greenway's goal came after Boston climbed back from a 2-0 deficit following a pair of goals by Kaprizov. Craig Smith put the Bruins on the board late in the first period, and Brad Marchand's power-play goal evened the score in the second.

"It's good that we were able to claw back, get ourselves back in the game," Marchand said. "They're a good team. They continued to push."

Kaprizov, the skilled second-year winger, fired a rocket from the point during the Wild's first power play for the first of his two goals. He added to his total later in the period when he split two defenders on a breakaway following a long pass from linemate Mats Zuccarello.

It was Kaprizov's sixth multigoal game of the season, with three coming in his last seven games. He had his eight-game point streak snapped Sunday. Kaprizov has a team-high 32 goals on the season.

His goal 6:55 into the game set an early tone for the Wild.

"That was great. It gets the crowd into it," defenseman Alex Goligoski said. "When our crowd's loud like that, it gets everyone going."

Cam Talbot made 24 saves to get the win. Swayman stopped 30 shots in the loss.

Minnesota defenseman Jared Spurgeon had two assists, including the second one on Greenway's goal.

Greenway led the Wild with six shots on goal, including the one that put Minnesota ahead for good.

"He's really taken a step," Wild coach Dean Evason said. "His confidence, his maturity, his willingness to compete in all areas of the game, physically, verbally. He's got a lot of confidence and he's a very effective player, obviously, and he's a big part of that line."

Boston was without captain Patrice Bergeron, who will be out at least two games due to the risk of infection in a previous arm injury. Bergeron has 17 goals and 28 assists in 56 games this season.

"You can't replace him, but I thought (Tomas) Nosek did a good job in the faceoff circle for sure," said Bruins coach Bruce Cassidy.

The loss snapped a three-game winning streak for Boston.

Tyson Jost made his Wild debut after he was acquired in a trade Tuesday from Colorado. Minnesota dealt forward Nico Sturm to get Jost, who centered the fourth line.

NOTES: With Bergeron out, Boston recalled forward Jack Studnicka from Providence of the AHL but he did not arrive in time for the game. . With his first-period assist on Kaprizov's goal, Zuccarello tied his career high for points with 61 set during the 2015-16 season with the New York Rangers.

Bruins: Play at Winnipeg on Friday.

Wild: Host the Chicago Blackhawks on Saturday, the third game of a nine-game homestand.