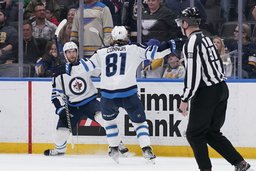 ST. LOUIS (AP) Pierre Luc-Dubois scored in overtime and Connor Hellebuyck made 28 saves in the Winnipeg Jets' 4-3 victory over the St. Louis Blues on Sunday night.

The Jets have won 10 of their last 12 games in St. Louis. The Blues have lost five of seven.

"It's do or die in overtime," Dubois said. "We played well. We did a lot of good things. Just to go home with two points is huge.

Kyle Connor and Mark Scheifele scored 1:03 seconds apart in the third period to give the Jets a 3-2 lead. Nikolaj Ehlers also scored for Winnipeg. The Jets improved to 4-17-2 when trailing after two periods.

The Jets won two of three games on the recently completed road trip.

"I really liked our level (of) desperation,": Winnipeg interim coach Dave Lowry said. "We played with lots of urgency. We had a purpose. Even giving up the goal late, we showed a lot of resiliency and stayed with our game. We understand the value of getting that extra point."

Schenn scored from his knees off a pass from Jordan Kyrou with 2:11 left in regulation to it to overtime.

Connor blasted a shot past Jordan Binnington for his team-best 37th goal of the season with 12:27 left in regulation for a 3-2 lead. Scheifele scored his 22nd to tie the game just over a minute earlier.

Hellebuyck had given up four goals or more in each of his last six games. He improved to 20-21-9 in his NHL-leading 50th start of the season.

"He's one of the best goalies in the NHL for a reason," Dubois said. "This is what we need from him."

Tarasenko broke an eight-game scoreless skid by whipping a shot past Hellebuyck with 27 seconds left in the second period to put the Blues up 2-1.

Tarasenko, who also added an assist, reached the 20-goal mark for the seventh season.

The Blues continue to struggle in overtime and have lost six of seven in extra sessions this season.

"Overtimes have not been good to us," Schenn said. "The guys get put on the ice to do it, myself included. And we've got to do better."

St. Louis coach Craig Berube said his team was unable to create any serious chances in the OT.

"(Winnipeg) won the draw and they had the puck the whole time," Berube said.

Winnipeg center Andrew Copp left the game early in the third period after a collision with Blues center Oskar Sundqvist. No penalty was called and Copp, who has a history of concussions, did not return to the game.

Blues C Robert Thomas missed the game with an illness. He tied a career high with four points in a 7-4 win over Nashville on Saturday. ... St. Louis LW Pavel Buchnevich missed his third successive game due to a concussion. ... Blues C Oskar Sundqvist returned to the lineup after sitting out three contests with a lower body injury,

NOTES: The Jets have played 32 road games - 24 have been decided by one goal or less. They are 12-12-8 away from home. ... Winnipeg has scored at least one power- play goal in 19 of the last 32 games since Dave Lowry took over as interim coach in mid-December.