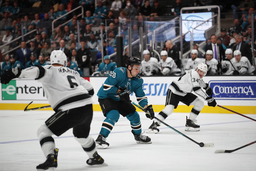 Jonathan Dahlen and Matt Nieto also scored, and Brent Burns and Nick Bonino each had two assists to help the Sharks win consecutive games for the first time in two months.

Adin Hill had 29 saves in his first appearance in more than a month to pick up his second shutout of the season and fifth of his career.

"It was great," Sharks head coach Bob Boughner said of Hill's performance. "The big saves he had to make at the crucial times, he did. I thought he played the puck really well, knocked down a lot of rims, which allowed us to spread out."

Cal Peterson had 22 saves for Los Angeles, which was coming off a 4-3 overtime loss at home to San Jose on Thursday night.

Meier scored the game's first goal midway through the first period on a power play, giving him six against the Kings this season.

"We defended well. We were blocking a lot of shots. We didn't give them a lot of room out there," Meier said. "Hiller made some unbelievable saves, stood up and stood on his head tonight and played really well. It's nice to have him back."

Nieto's fifth goal gave San Jose a 2-0 lead with just over eight minutes left in the first, and Dahlen connected on a shot from the slot for his 12th off an assist from Meier after a turnover with 49 seconds remaining in the period.

"The outcome is not nearly as close as we wanted, but they came out and obviously at 3-0 after the first period, that's a big hole to dig ourselves into," Kings center Anze Kopitar said.

Hertl's power-play goal at 8:05 of the second extended San Jose's lead to 4-0. Hertl was near the crease when he rebounded a shot by Meier that hit the post and bounced off Kings defenseman Jacob Moverare's shoulder and slipped a backhander past Peterson.

Hertl scored with less than five minutes to go in the third to seal the win. He tied Meier for the team lead with 25 goals.

"I didn't think we were bad to start with," Kings head coach Scott McLellan said. "Even after they scored the power play goal, I thought it was a pretty evenly played game. We had some chances, Hill made some really good saves, the back-to-back turnovers below our goal line really hurt our team, and then they got rolling after that."

Hill's shutout was his first since Oct. 19 against Montreal. San Jose hadn't blanked an opponent since James Reimer shut out Chicago on Nov. 28.

The Western Conference rivals meet again Thursday in Los Angeles in what will be the third meeting in eight days between the teams. San Jose improved to 3-0 against the Kings.

Kings F Dustin Brown suffered an upper-body injury in the second period and did not return. He was seen clutching his hand as he left the ice. He's expected be out for an extended period, McLellan said. D Matt Roy left the game in the third period with a lower body injury and did not return. The severity of Roy's injury was not immediately known.

The Kings placed F Andreas Athanasiou (unspecified) on injured reserve retroactive to March 10. D Christian Wolanin was recalled from Ontario of the AHL.

NOTES: Kings G Jonathan Quick's next game will be his 700th . ... Peterson had won of five of his last six starts and eight of last 10. ... Sharks F Kevin Labanc is expected to participate in shooting drills next week but is likely a few weeks away from being activated, head coach Bob Boughner said. ... Reimer (lower body) is expected to join the Sharks for practice on Monday. . Sharks F Noah Gregor was scratched for Saturday's game. He was replaced by Jeffrey Viel. Gregor's next game will be his 100th. ... Sharks D Erick Karlsson played his first home game since undergoing forearm surgery in late January.