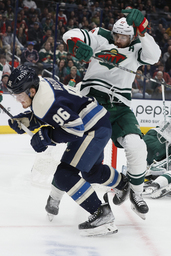 COLUMBUS, Ohio (AP) Yegor Chinakhov scored the shootout winner after Zach Werenski tied the game with 32 seconds left in regulation to rally the Columbus Blue Jackets to a 3-2 win over the Minnesota Wild on Friday night and snap a four-game losing streak.

Chinakov also scored in the first period, and Elvis Merzlikins stopped 36 shots in the win for Columbus.

"We hung around in the game against another really good team and found way," Blue Jackets coach Brad Larsen said. "I'm happy the guys were able to get to OT. They got a couple of good looks in OT, then Chinny comes through."

Mats Zuccarello had a goal and an assist, and Kirill Kaprizov also scored for Minnesota. Kaapo Kahkonen had 26 saves in the Wild's first loss in three games. Minnesota remained in third place in the Central Division, a point behind St. Louis.

"They kept pushing and got a break at the end," Wild coach Dean Evason said. "We make a mistake, obviously and it ends up in our net.

Columbus went up 1-0 on Chinakhov's first power-play goal of the season, a wrister from the left circle that beat Kahkonen glove side with 6:29 left into the game.

Kaprizov tied it with 26 seconds left in the first, just 15 seconds into a 4-on-3 Wild power play, with a wrister from the left circle. It was his 30th goal of the season and extended his point streak to eight games.

Zuccarello put the Wild ahead 2-1 with 6:27 left in the second with his deflection of a shot by Jared Spurgeon that bounced off Merzlikins and dribbled into the goal.

Werenski tied it again with a shot from the blue line that beat Kahkonen with time running out to send the game to overtime.

"A lot of time you shoot those and the goalie moves over to make the save," Werenski said. "He really couldn't see. That was a big goal for us, a big win."

Tonight was the 20th time in Blue Jackets history the team tied a game in the final minute of regulation and the second time in a week. The Blue Jackets have now come back in 19 of their 29 wins, including nine of their last 11, tying Colorado for the most in the NHL. The club leads the league with eight wins when trailing heading into the third period.

Jakub Voracek took a knee-on-knee hit from Marcus Foligno in the third period and skated off in obvious pain. He returned to the bench but not the ice. Patrik Laine also limped off the ice in overtime and did not return. Justin Danforth was sidelined with a lower-body injury after blocking as puck Thursday and was replaced in the Blue Jackets lineup by Emil Bemstrom.

BIG PROBLEMS IN THE BIG APPLE

After losing to the Islanders 6-0 Thursday night, the Blue Jackets ended up stranded in New York overnight due to an issue with the club's plane. They returned home at noon Friday.

Forward Alexandre Texier is on an indefinite leave of absence from the Blue Jackets for personal reasons. Texier returned to France in late February and the team cited "personal losses of people very close to him" as the reason for his leave.

"I got tired of working my ass off and not getting the results I want," Merlikins said. "I just thought, `I'm not going to think any more. I'm just going to go out, play hockey and have fun.'"