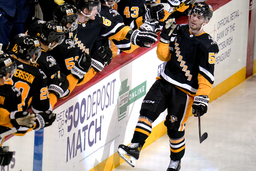 PITTSBURGH (AP) Pittsburgh Penguins general manager Ron Hextall began the day by saying he believes the pieces are in place for a long playoff run even if he opts not to be a major player at the trade deadline.

Hextall's team ended it by showing flashes that their boss might be right.

Mark Friedman's first goal in 10 months early in the third period broke open a tie game and Bryan Rust's 20th goal of the season provided some late cushion as the Penguins beat the Vegas Golden Knights 5-2 on Friday night.

After urging his team's secondary scorers to get to the net in an effort to take some of the scoring load off the first line anchored by superstar Sidney Crosby, Friedman, Evan Rodrigues and Jeff Carter all found the back of the net as Pittsburgh won to slip past the idle New York Rangers into second place in the Metropolitan Division.

"We definitely don't want to rely on one line, right," Carter said after collecting his 14th goal of the season but just his third in his last 18 games. "I think Sid's line and our power play and (Evgeni Malkin's) line have been doing a good job to carry the load for us. We need everybody to chip in, it's no secret."

Friedman, a defenseman who has bounced in and out of the lineup this season, fired a wrist shot off the rush that zipped over Laurent Brossoit's stick 3:49 into the third for his first goal since last May to give the Penguins a 3-2 lead they wouldn't relinquish.

"I just jumped up and (Brian Boyle) saw me and made a great pass and I was pretty relieved to see it go in the net," said Friedman, who has served as the team's seventh defenseman for long stretches this season and often been relegated to watching from the press box.

Rust's power-play marker with just over 5 minutes remaining after the Penguins killed off back-to-back penalties sent the Golden Knights to their third straight loss. Vegas lost star winger Max Pacioretty to an undisclosed injury in the second period and he did not return.

"We're going to concentrate on the really good things we did tonight," Golden Knights coach Pete DeBoer said. "We outplayed, for long stretches, a really good team over there. So it's a challenge, but that's the ups and downs of a season. We have a lot of hockey left. We've got a chance to finish this road trip strong with a couple (of) wins."

Evan Rodrigues added an empty-net goal to seal it. Mike Matheson and Jeff Carter also scored for the Penguins.

"The fact we got some contributions tonight throughout our lineup speaks volumes," Pittsburgh coach Mike Sullivan said. "It's a real good example of the type of team we're trying to build here and what the expectations are throughout the lineup."

Tristan Jarry withstood a massive push by Vegas in the second period on his way to 39 saves.

Jake Eichel scored his fourth goal in less than a month since making his Vegas debut. Alex Pietrangelo added his eighth of the season and Jonathan Marchessault added two assists. Brossoit made 28 stops for Vegas.

Penguins defenseman Brian Dumoulin did not play due to what Sullivan called a "non-COVID" illness. McGinn exited the game with an upper-body injury. Sullivan called McGinn "week to week."

Sullivan gave the struggling Kapanen - who has just two goals since the calendar flipped to 2022 - the night off. He stressed afterward it does not mean it will become a regular occurrence.

"By no means, because we made this decision tonight, doesn't change what we think of Kappy as a player, as a person," Sullivan said. "Our hope is maybe a different perspective might be beneficial for him and give him an opportunity to hit the reset button going forward."

Fresh off continuing their cross-border rivalry at the Beijing Games last month, members of the American and Canadian women's hockey teams attended the game in a suite as guests of the Penguins. The players are in town to hold a Professional Women's Hockey Players' Association-organized "Rivalry Rematch," to be played at PPG Paints Arena on Saturday.

It'll be the first game between the two since Canada won gold by beating the defending champion U.S. 3-2 on Feb. 17.

"I think it's going to be a lot of fun. I think we're all competitors and even though we have that camaraderie off the ice, that competitive instinct kicks in and it gets pretty fierce," said Canadian forward Sarah Nurse, who led the tournament with an Olympic-record 18 points. "Like, we're sitting across the box tonight, and you kind of look over and it's, `We're going to be back in a game tomorrow.' It's going to be exciting."

Knights: Continue their road trip Sunday when they play at Columbus.

Penguins: Meet Metropolitan Division-leading Carolina for the third time in eight games when the Hurricanes visit on Sunday. Carolina has won each of the first two meetings.