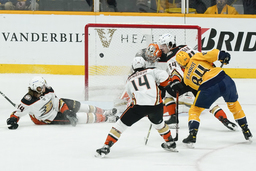 Filip Forsberg had a goal and two assists and Colton Sissons also scored for the Predators, winners of three straight. Nashville entered Thursday in the top wild-card spot in the tight Western Conference race to the postseason.

"I liked our focus level," Predators coach John Hynes said. "That's the most important thing. Don't necessarily think it was our best game, but I think good teams find ways to win."

Adam Henrique scored and John Gibson made 26 saves for Anaheim, which has lost three of four.

"We never want to accept losing and this is about winning each and every day, but I thought our guys battled hard," Ducks coach Dallas Eakins said. "I thought they gave us about everything that they could."

Duchene scored the game's first goal at 10:53 of the opening period. With the Predators on a power play, Duchene finished off a slick tic-tac-toe passing sequence that originated with Mikael Granlund's pass from the right side to Forsberg in the left circle, who immediately found Duchene on the right side for his 28th goal of the season.

"We were pretty average tonight, but found a way to get it done," Duchene said. "Got some big saves, special teams were big. You're not going to be at you're best every night, but still found a way."

Duchene returned Forsberg's earlier favor and set him up at 11:41 of the second for his 28th goal of the season.

"Yeah, obviously a full year up to this point playing together and playing sporadically together before that, too," Forsberg said. "That definitely helps and it builds chemistry in practice."

Saros' best saves came late in the second. Following a Nashville turnover, Cam Fowler skated into the slot unchecked, but Saros was able to glove his wrist shot from in close. Less than a minute later, Saros stopped Sam Steel's point-blank backhand with an outstretched left pad.

Henrique spoiled Saros' shutout bid with 5:48 to go in the third when he tipped Josh Mahura's shot through Saros and just over the goal line.

Sissons sealed it with 2:30 remaining with a slap shot from the top of the right circle that beat Gibson high to the far side. Duchene added an empty-net goal with just over a minute remaining.

Duchene's has six goals in his last four games and extended his point-scoring streak to four games. Over that stretch, he has six goals and two assists. His team-leading 29 goals are one behind his career high of 30, set in 2015-16 as a member of the Colorado Avalanche.

The Ducks had a few new faces in the lineup Thursday.

Defenseman Andrej Sustr, claimed off of waivers from the Tampa Bay Lightning on Tuesday, played his first game as a Duck. Forwards Danny O'Regan, Vinni Lettieri and Buddy Robinson - all recalled from the San Diego Gulls earlier Thursday - saw action as well.

"I thought our guys that took on bigger roles that have been here and the guys that came up did their absolute best that they could," Eakins said.

"It's hard when you're missing a lot of guys, especially (Zegras) and (Getzlaf) who bring that offensive side to us," Ducks forward Troy Terry said.