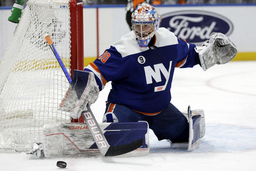 Josh Bailey had a goal and an assist, Brock Nelson and Jean-Gabriel Pageau also scored and Ryan Pulock and Anthony Beauvillier each had three assists to help New York win for the second time in three games.

"It's great to see him get rewarded," Bailey said about Lee's three-goal performance. "He's our leader. We all look up to him. He has so much respect in that room. It's great to see we rewarded."

Joonas Korpisalo made 27 saves in his first start since Jan. 31st for the Blue Jackets, who have lost two straight. Columbus was 0 for 4 on the power play.

Leading 1-0 after 20 minutes, the Islanders scored three times in an 11:36 span of the second period to pull away.

Bailey snapped a goal drought dating back to Jan. 18th when he slipped a puck between Korpisalo's legs at 6:08 to give New York a 2-0 advantage. Kyle Palmieri won a battle along the boards and set up Bailey.

Lee wired a wrist shot from the slot with 6:11 remaining in the period as the Islanders' captain took advantage after Blue Jackets forward Patrik Laine turned the puck over in the neutral zone.

The Islanders capitalized on another Blue Jackets turnover when Jakub Voracek coughed up the puck while Columbus was on the power play. Pulock picked up the loose puck and set up Pageau for a one-timer with 2:16 remaining.

Lee completed the hat trick with two goals in the third period including a power-play goal with less than 2 seconds to go.

"He's been outstanding for us," Pageau said of Lee. "The way he leads the team, day in and day out and the way he comes in and work every day, whatever the result is, you know, you're going to get 110%."

Sorokin preserved the shutout with his second breakaway stop of the game in the second period when he denied Gustav Nyquist's five-hole attempt at 3:53.

"We've been playing hard as of late, tonight we kind of let that slip," Blue Jackets defenseman Zach Werenski said. "Kind of handed them that game. In the first we were down 1-0 but we were putting in some good minutes, playing the right way. The second period completely changed, next thing you know its 2-0, 3-0, 4-0 and at that point it's too hard to come back."

Nelson opened the scoring when he dipsy-doodled his way to the slot and fired a wrist shot that trickled past Korpisalo at 10:32 of the first period. Shortly before Nelson notched his 22nd goal on a power play, Sorokin denied Boone Jenner on a short-handed breakaway. Dobson recorded his fourth power-play assist in the previous three games and extended his point streak to four games.

"Usually when you get those saves or to get those breaks, you're able to turn into something successful," New York coach Barry Trotz said. "We made the most of it."

Blue Jackets are 10th in the NHL in goals scored but were shut out for the fifth time this season.

Islanders forward Mathew Barzal missed his sixth straight game with a lower-body injury. However, the 24-year-old center did practice with the team for the first time since sustaining the injury on Feb. 26 against Los Angeles. ... Islanders defenseman Zdeno Chara remains on injured reserve despite skating with the team at the previous two practices. The 44-year-old is expected to return to the lineup on Friday.

The Islanders have one of the most condensed schedules remaining in the NHL with 28 games in 39 days. The demanding stretch is highlighted by eight sets of back-to-back games.