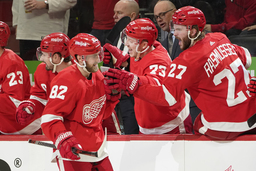 DETROIT (AP) Mats Zuccarello and Kevin Fiala both scored in the shootout, lifting the Minnesota Wild to a 6-5 victory over the Detroit Red Wings on Thursday night.

"We were up and down, but it was a very emotional game," Minnesota coach Dean Evason said. "There's a lot of intensity now, which is probably a good thing right now. We need to be that intense right now for us to play the way that we want to play."

Vrana and Lucas Raymond each scored twice in regulation, and Jordan Oesterle had a goal with 2:51 left that tied it at 5 for Detroit. Nick Leddy had three assists for the Red Wings, who blew a 4-2 second-period lead, were outshot 40-34 and lost their fourth game in a row.

Boldy opened the scoring and Vrana, who missed the first five months of the season with a shoulder injury on the first day of training camp, tied it for Detroit.

Eriksson Ek was credited with an unassisted goal when Detroit goaltender Alex Nedeljkovic accidentally put the puck between his legs into the net while trying to clear it to give Minnesota a 2-1 lead.

After Raymond tied it, Vrana scored a power-play goal to put Detroit up 3-2 after one period. Raymond scored again in the second period to give the Red Wings a two-goal lead.

Zuccarello scored a power-play goal in the second period, and Boldy and Kaprizov scored in the third to put Minnesota up 5-4. But Oesterle tied it late in regulation to send it to overtime.

NOTES: Detroit's Marc Staal played in his 999th career game. If he plays Saturday at Calgary, he will be the third member of his family to reach 1,000 games played, making the Staals the first trio of brothers to reach that milestone. He would join brothers Eric (1,243 games as of Thursday) and Jordan (1,068). ... Five of Boldy's 11 goals this season have come against Detroit. He had a hat trick against the Red Wings on Feb. 14.

Wild: at Columbus on Friday night.