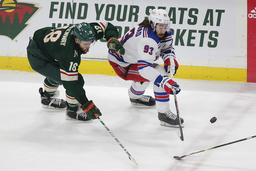 ST. PAUL, Minn. (AP) With the Minnesota Wild mired in a severe slump, players might have preferred a mental break.

They asked for an intense practice instead of a day off. The result was a much-needed win.

Kevin Fiala scored twice in the second period to help the Wild pull away, and Marcus Foligno added a goal and two assists in a 5-2 victory over the New York Rangers on Tuesday night.

"We just wanted to come in and work. We've been in the league a long time. These little ups and downs that you go through, you need to do that," said Foligno, the alternate captain who was in the conversation with coach Dean Evason on Monday about the desire for a crisp workout.

Ryan Hartman and Joel Eriksson Ek also scored for the Wild, who broke a three-game home losing streak and won for only the third time in their last 11 games. All-Star Cam Talbot stopped 23 shots for his third win at home in more than three months. He gave up 21 goals in his previous five starts.

"We've got a lot left, so hopefully we've caught something and we can go forward," Evason said.

Dryden Hunt and Mika Zibanejad scored for the Rangers, whose three-game winning streak was stopped. They're still 8-3-1 in their last 12 games.

"The other team was hungry. We knew they were not having the best record lately, and they just came out strong," Georgiev said.

The Wild, who have a league-most 17 home games remaining, needed a win in the worst way after allowing 49 goals over their previous 10 contests. They moved within two points of second-place St. Louis in the Central Division and are one point ahead of Nashville and two points up on Dallas, with a game in hand on the Blues, Predators and Stars.

With the Rangers resting goalie Igor Shesterkin, the Wild put backup Alexander Georgiev through the wringer. After Kirill Kaprizov's drop pass set up Hartman midway through the first period for his 23rd goal of the season, Eriksson Ek followed with his tip-in of Foligno's shot about four minutes later for the 2-0 lead. The Wild won nine of 11 faceoffs in the first period.

"We did some good things, but I thought they were a little more desperate," Rangers center Ryan Strome said.

Zibanejad scored unassisted and short-handed after pilfering the puck from his former teammate Mats Zuccarello before the midpoint of the second period, and the Wild felt Zibanejad was guilty of hooking. They shook that off with the kind of force and confidence they've been lacking lately.

Fiala finished off that power play with the tiebreaking goal, celebrating with rookie Matt Boldy by screaming in each other's faces and embracing in a bear hug. Then Foligno, fed by a textbook stretch pass from defenseman Matt Dumba, used a deke at the edge of the crease to beat Georgiev for his 19th goal of the season.

Fiala then hit the 20-goal mark for the third straight year by controlling a bouncing pass from Zuccarello - who notched his 40th assist - and flicking a shot above Georgiev's glove. Georgiev made 23 saves.

The Rangers, who entered the game with the second-best goals-against average in the league, remained in a second-place tie with Pittsburgh in the Metropolitan Division with 77 points. They have one game in hand on the Penguins.

Evason reassembled the familiar second line with Eriksson Ek centering Foligno and Jordan Greenway, and the trio combined for five points. Eriksson Ek went the previous seven games without a point. Foligno had one goal and no assists in the last 12 games.

The Rangers put all three of their Minnesota natives - center Jonny Brodzinski and defensemen Ryan Lindgren and K'Andre Miller - in the starting lineup. Brodzinski and Wild right wing Nick Bjugstad were teammates at Blaine High School, about 25 miles northeast of Xcel Energy Center.

Rangers: Zibanejad has seven goals and nine assists in his last 14 games. ... Artemi Panarin had an assist and has 18 points in 17 career games against the Wild.

Wild: Hartman has four goals in the last four games after going eight games in a row without scoring. ... Kaprizov has 18 points in his last 13 games.

Rangers: At St. Louis on Thursday.

Wild: At Detroit on Thursday.