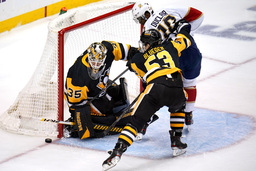 PITTSBURGH (AP) Anthony Duclair scored the tiebreaking goal in the second period and Carter Verhaeghe added an insurance score in the third as the Florida Panthers beat the Pittsburgh Penguins 4-3 on Tuesday night.

"Everyone played well, everyone was playing simple hockey," Verhaeghe said. "It was almost like a playoff style. I think these games on the road are really going to be beneficial in the playoffs."

Duclair and Verhaeghe matched career highs in goals. Duclair scored his 23rd of the season and Verhaeghe his 18th as Florida won its fourth straight game. Sam Reinhart scored his 19th, Aaron Ekblad his 15th and Sergei Bobrovsky stopped 32 shots.

Jake Guentzel scored his 28th goal of the season and Bryan Rust added his 19th in his 400th NHL game. Tristan Jarry made 25 saves, as Pittsburgh recently went 1-1-1 against three of the NHL's top four teams - Florida, Carolina and Tampa Bay.

"It's disappointing that we lost two of those three games," Crosby said. "But at the same time, for good chunks of those games, we did good things and we were right there."

"Down the stretch, I thought we did a lot of good things that allowed us to win the hockey game where we really buckled down and defended," Panthers' interim coach Andrew Brunette said.

Reinhart batted the puck out of the air from the slot at 12:43, and Ekblad beat Jarry with a shot from the point 1:55 later.

Pittsburgh scored twice in a nine-second span early in the second period.

"We battled back in the second period," Crosby said. "But we put ourselves in a tough spot going down against a really good hockey team like that. We have to be better, especially from the start, to give ourselves a better chance."

Florida regained the lead for good following Duclair's power-play goal from the slot at 7:02 of the period. Duclair, who also matched a career high in points, scored in his third straight game.

"These are good experiences to learn from," Brunette said. "They were able to do it against a really good hockey team on the road."

Among the players who skated in their first 400 games with Pittsburgh, Rust's 257 points are the seventh-most during that span.

PANTHERS HAVE THE POWER

Florida has 11 power-play goals in its last nine games.

The Panthers recently established a club record with two power-play goals in each of their last four games. Florida, which ranks first in the league on the power play since Jan. 1, hasn't given up a power-play goal in four straight games.

Ekblad's 15 goals are two shy of matching the single-season franchise record for goals by a defenseman. He's the fourth defenseman in franchise history to reach 50 points in a season.

Aleksander Barkov has multiple points in nine of his last 11 games, with five goals and 19 points during the span. He has one goal and eight points in his last three games.

Jonathan Huberdeau has assists in each of his last three games. He's two from matching his single-season career-high of 62, established in 2018-19, which was also a club record. Huberdeau, with 23 points in his last 16 games, has a point in all but 10 of Florida's games this season.

Bobrovsky has won his last six road games and improved to 11-3-3 away from home. He's six wins from matching the single-season club record, twice set by Roberto Luongo.

He was initially injured on Jan. 23 in a home shootout win against Winnipeg following a hit from defenseman Brenden Dillon. Blueger, a top defensive forward and key member of the Penguins' penalty kill, has eight goals and 17 points in 41 games this season.