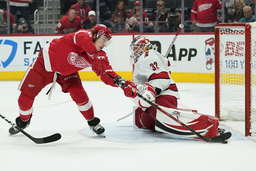 Raymond's 16th goal of the season came on a rebound of a Tyler Bertuzzi shot. Carter Rowney, Michael Rasmussen and Dylan Larkin scored in regulation for Detroit, which had lost its last two games, and Alex Nedeljkovic made 27 saves.

Detroit was awarded a power play when the Hurricanes were whistled for too many men on the ice.

"There's so much open ice on a 4-on-3 that you can start overpassing the puck to find a perfect shot," Raymond said. "(Assistant coach Alex Tanguay) reminded us to get the puck on the net and make things happen."

"They got a couple of looks and obviously at the end they just got the bounces going their way and find the back of the net," Raanta said. "Then you look up and see there's only eight seconds left. It would've been nice to get to the shootout and see what happens there."

Carolina killed off two penalties early in the game, then scored on a power play with seven minutes left in the first period. Vincent Trocheck set up Aho's 24th goal overall and 12th on the power play.

Rowney tied it at the 12-minute mark of the second period, tapping the puck at the crease through Raanta's legs for his fourth goal.

"The last few games, we've stumbled out of the gate, but I thought we were good tonight from start to finish," Nedeljkovic said. "Even when they got the first goal, we responded well and stuck with it."

Rasmussen gave Detroit a 2-1 advantage 2:45 into the third period. He snuck behind the defense off a lead pass from Jordan Oesterle and slipped a low shot past Raanta for his eighth goal.

Fast knotted the score at 7:05 with his 11th goal, beating Nedeljkovic from the right circle.

Staal scored on a backhander with 3:48 left in regulation but Larkin answered 38 seconds later with his 27th goal.

"I think things got a little haywire in the third period, but I thought overall we defended pretty well and we competed extremely hard," Red Wings coach Jeff Blashill said. "That's a very good team for a reason, but our compete level was very, very good and we created chances against a very good defensive team."

Defenseman Brady Skjei lost the puck in his own zone, leading to Larkin's tying goal.

"Just a couple of weird bounces," Hurricanes coach Rod Brind'Amour said. "We get ahead and the puck just flips over Skjei's stick at the end. Overall, we weren't that great but we were still in position to win it."

Hurricanes forward Teuvo Teravainen extended his point streak to nine consecutive games with a first-period assist. . Aho has 20 points in 20 career games against Detroit. . Larkin extended his point streak to 10 games. . The teams close out their three-game season series in Carolina on April 14. The Hurricanes won the first meeting on Dec. 16, 5-3.