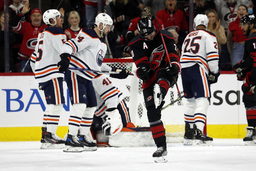 RALEIGH, N.C. (AP) Teuvo Teravainen had a goal and an assist, Sebastian Aho also scored and the Carolina Hurricanes won their fifth game in a row by beating the Edmonton Oilers 2-1 on Sunday.

Andrei Svechnikov provided two assists for the Hurricanes, and Frederik Andersen made 29 saves for his league-leading 29th victory.

Edmonton had scored at least three goals in eight straight games, but put only six shots on goal in the third period.

"We're just so in sync, whoever is out there," Carolina defenseman Brett Pesce said of the defensive effort. "Obviously, we're really confident right now."

Edmonton center Leon Draisaitl, who is second in the league with 36 goals, didn't register a shot on goal.

"If you're holding that guy without a shot, you're doing something right," Hurricanes coach Rod Brind'Amour said.

One day after his first career hat trick, Derek Ryan scored an unassisted goal for the Oilers, who were on their third stop of a five-game trip. Mike Smith made 27 saves for Edmonton, but was tagged for a loss in his third consecutive outing.

"I thought they pushed us," Oilers coach Jay Woodcroft said. "We pushed them."

Both of Carolina's goals came in similar fashion with crisp passing.

"It's kind of what was available," Brind'Amour said of the puck movement. "The whole key for us is to understand what's available, what is the best play."

Jalen Chatfield and Svechnikov set up Teravainen's goal in the first period. And Aho finished a power-play sequence when the puck went from Teravainen to Svechnikov later in the period.

"We created those changes and obviously big goals early on," said Aho, who now has a team-high 23 goals. "It was enough for us."

The Oilers have allowed at least one power-play goal in six games in a row.

"That's an area that we can continue to clean up," Woodcroft said. "We can be better for sure."

The Hurricanes were perfect on four penalty-killing stints.

"It all starts with a hot goalie," Aho said. "You trust your own goalie."

Oilers captain Connor McDavid, the NHL scoring leader with 75 points, logged less than 2 1/2 minutes in the first period. He exited following a high-sticking penalty on Carolina defenseman Brady Skjei. McDavid came back at the beginning of the second period after receiving what Woodcroft referred to as treatment for a laceration and dental work.

There was a similar trend for both Carolina's home wins during this stretch.

The Hurricanes had three days off before defeating Columbus 4-0 on Friday night. They were off Saturday before the Oilers arrived.

In both cases, the opponent had played and won the day before at Florida, which leads the Eastern Conference in points.

Oilers center Ryan Nugent-Hopkins missed the game after sustaining an upper-body injury during the first period Saturday at Florida. Right winger Kailer Yamamoto was out of the Edmonton lineup for this first time this season, with Woodcroft calling his situation day-to-day with bumps and bruises. . Ex-Hurricane Warren Foegele played on the visiting team for the first time in Raleigh. He was called for offsides on a coach's challenge, negating a would-be goal in the game's opening minute from McDavid. . Edmonton used a coach's challenge in the second period, wiping out Pesce's tally.

Oilers: At Philadelphia on Tuesday.

Hurricanes: At Detroit on Tuesday.