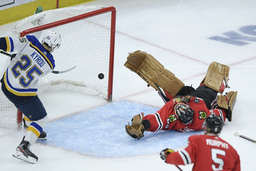 This trip was much better.

Perron scored two goals, Jordan Binnington made 30 saves and the Blues beat the Chicago Blackhawks 4-0 on Sunday for their fourth straight win.

The 33-year-old Perron left St. Louis' 3-2 overtime loss at Chicago on Nov. 26 after he was hit by Blackhawks defenseman Jake McCabe in the first period. He was sidelined for a month before returning on Dec. 29.

"I did think about it the first time I went in that corner with McCabe again," Perron said. "I was like `All right, well, time to behind it behind (me).'"

Perron, Jordan Kyrou and Pavel Buchnevich scored during St. Louis' dominant second period, and Perron tacked on a third-period goal in the opener of a four-game trip. Brayden Schenn had two assists for St. Louis, and Binnington recorded his second shutout of the season - both against Chicago.

"We were really solid," Binnington said. "The team did a good job making my job easy."

The Blues improved to 3-0-1 against the Blackhawks, closing out their season series. They also pounded Chicago in their previous meeting, winning 5-1 in St. Louis on Feb. 12.

Marc-Andre Fleury made 31 stops for Chicago, turning away several quality chances for St. Louis. The Blackhawks (19-27-8) lost for the fourth time in their last five games.

"You turn pucks over against these guys, they'll quick-hit you right away," interim coach Derek King said. "Their transition game is really good. That's why they're one of the top teams. We turned pucks over at the wrong time and it's in the back of your net."

The Blues (32-14-6) went ahead to stay when Kyrou finished a pretty passing sequence with Schenn 2:26 into the second. Buchnevich beat Fleury on the glove side with a wrist shot at 6:56, and Perron made it 3-0 with a power-play goal with 1:52 left in the period.

"We just didn't capitalize on our chances," Blackhawks forward Dylan Strome said. "I think we had lots of good looks on a couple of power plays, couple of good chances in the first, they get the lead and we kind of go from there."

Kyrou got his 21st goal after coming up empty on a couple prime scoring opportunities in the first. He had two goals and an assist during Friday night's 5-3 victory over Buffalo.

Schenn's two assists in the second - he also set up Perron's goal with a cross-ice pass - gave him 19 points in his last 14 games.

Perron added his 11th goal 3:04 into the third, squeezing one in from a tough angle on the side of the net. He had just two goals in his previous 19 games.

"I thought he played a hell of a game," Blues coach Craig Berube said. "Competitive all game and did some real good things."

Blues: F Oskar Sundqvist was held out because of a lower-body injury. He left Friday night's win against Buffalo in the first period. Dakota Joshua replaced him in the lineup.

Blackhawks: D Jake McCabe returned to the lineup after missing Friday night's 8-5 victory over New Jersey with lower back soreness. But D Calvin de Haan missed his second straight game because of a right groin strain. ... C Tyler Johnson could play Thursday against Edmonton. Johnson had neck surgery on Dec. 3.

Blues: At the New York Rangers on Wednesday night.