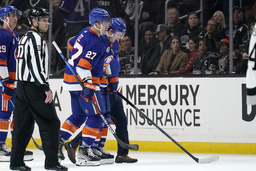 LOS ANGELES (AP) Matt Roy and Trevor Moore had a goal and an assist, and the Los Angeles Kings beat the New York Islanders 5-2 on Saturday night for their fifth straight win.

Los Angeles followed up a 4-1 win at Anaheim on Friday with another emphatic performance, improving to 9-1-2 in its past 12 games.

"It looked a lot like yesterday's game, where everybody had an impact on the game," said Kings assistant Trent Yawney, who ran the bench for the second straight game with coach Todd McLellan in COVID-19 protocols. "I mean, a little bit tougher back-to-back, but I thought the guys really showed some mental toughness."

Semyon Varlamov allowed four goals on 34 shots in his first start since Feb. 2. Anders Lee and Jean-Gabriel Pageau scored, but the Islanders had their run of four straight games earning a point broken.

"We were ready to go. We just didn't execute," Lee said. "We didn't play to the level that they came out with. . The starts are something that we've focused on, and regardless of what we say, we've got to execute it."

Mathew Barzal and Zdeno Chara missed the third period with injuries for the Islanders, who were a mess from the start after allowing two goals on five shots in the opening 7:51.

Things got worse 56 seconds into the second period when Cal Clutterbuck knocked the puck into his own net off a defensive zone faceoff to put the Kings ahead 3-0. The gaffe allowed Byfield to take credit for his second career goal.

After that, the Kings never risked a letdown after a big rivarly win over the Ducks.

Lee got New York on the board midway through the second but any lift from his 14th goal was erased when Mathew Barzal hurt his left leg with 8:11 remaining.

Barzal could not put any weight on the leg after Danault fell on him along the boards. Barzal came back for one shift but immediately went back to the dressing room at its conclusion. He leads the team with 25 assists and is third with 12 goals.

"You never want to see one of your teammates in pain and in trouble there. Yeah, it's just a tough situation but `Barzy' is a tough kid," Lee said.

Chara missed the final 9:25 of the second because of an upper-body injury following a hit on Kings center Blake Lizotte and was not on the bench for the third.

Islanders coach Barry Trotz did not immediately know if Barzal or Chara would miss games because of the injuries.

The second line of Danault, Trevor Moore and Viktor Arvidsson continued their torrid run, giving Los Angeles the lead after 3:43. Danault scored for the fifth time in seven games, while Moore has five points in his past four games after picking up an empty-netter with 17 seconds remaining. Arvidsson has five goals and five assists in his past 10 outings after getting a helper on Moore's ninth goal.

NOTES: The Kings outshot the Islanders 35-28, marking the 20th consecutive game where they got more pucks to the net than the opposition. It is tied for the third-longest streak since the NHL started tracking shots in the 1959-60 season. . Kopitar got his 50th point of the season, joining Marcel Dionne, Dave Taylor, and Butch Goring as the fourth Kings player with at least 50 points in nine straight seasons. . Kings general manager Rob Blake hopes D Alexander Edler, who broke his ankle on Dec. 11, can return by the end of March.

Islanders: At Anaheim on Sunday night.