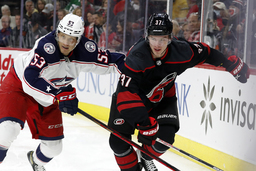 RALEIGH, N.C. (AP) The Carolina Hurricanes did everything they wanted early except find the back of the net.

Once they did, the goals kept coming.

Jordan Staal got Carolina on the board with a determined second-period sequence, then the Hurricanes broke it open with two quick third-period goals to beat the Columbus Blue Jackets 4-0 on Friday night.

The Metropolitan Division-leading Hurricanes finished with a season-high 50 shots, leaving netminder Frederik Andersen with a relatively quiet night in earning his third shutout this season on 19 saves.

Teuvo Teravainen scored late in the second, then Nino Niederreiter and Vincent Trocheck scored 36 seconds apart in the opening minutes of the third to blow the game open.

More importantly, the Hurricanes kept their edge after ending the first scoreless despite a 16-3 shot advantage.

"You always watch about getting frustrated in those kind of games," coach Rod Brind'Amour said, adding, "You have to keep doing what we were doing. That's what I liked about the game, is we didn't really change anything. We just kept sticking with it and it paid off."

Both teams entered on winning streaks, with Columbus at a season-high four wins and Carolina with three straight. And the Blue Jackets had surged to win seven of eight, a stretch that included five road wins - the last coming a day earlier at Atlantic Division-leading Florida.

But the Hurricanes controlled the puck from the start and surrendered few scoring chances, whether at even-strength or with its NHL-best penalty kill.

"You could see it," Columbus coach Brad Larsen said. "It's not a business of excuses, but I was really worried about tonight's energy just because of how intense the (Florida) game was. ... Usually we'd say we're a half-step behind, but I think tonight we were a good full step behind."

It took roughly half the game, though, for Carolina to finally beat J-F Berube after firing a steady stream of shots on net.

Staal broke through after being denied on a breakaway attempt and a quick rebound chance. The Hurricanes controlled the puck and Niederreiter found Staal near the right post, where he was stopped again by Berube's leg before batting in his own airborne rebound at 9:22.

"The fifth time is the charm, I guess," Staal said.

Teravainen followed late in the period off Sebastian Aho's faceoff win. The puck slid back and across the ice for Teravainen to snap it home, ending the power play after only 3 seconds.

By the end of that period, Carolina led 37-9 in shots.

Berube had won the past three games with the Blue Jackets, which had been his first starts in the NHL since last earning a win in April 2018. He finished with 46 saves.

GAVRIKOV OUT, BACK IN

The Blue Jackets lost defenseman Vladislav Gavrikov for a stretch when he took a puck to the helmet on a short pass, going down to the ice to take away a passing angle for Carolina's Brett Pesce as the Hurricanes closed in on the crease.

Gavrikov was bleeding on the ice before he got up and skated to the tunnel with a towel on the left side of his head midway through the first period. He returned for the second period.

Gavrikov had a crescent-shaped seeping wound on the left side of his eye socket when speaking with reporters after the game, blood oozing down his cheek.

"That was a 24 hours for my face, I got a high-stick yesterday," he said, adding; "My wife said it looks like right now Harry Potter."

Both teams were down defensemen due to injuries.

Columbus' Zach Werenski was out again after missing Thursday's win at Florida due to an upper-body injury. Carolina was missing defensemen Tony DeAngelo and Brendan Smith.

Brind'Amour said Thursday that DeAngelo could miss a month with an injury to his midsection. Smith is still recovering after taking a puck to the ear while sliding to block a shot in Sunday's win at Pittsburgh.

The shutout ended an 11-game points streak for Columbus' Patrik Laine, who had 13 goals and eight assists.

Hurricanes: Remains at home to face Edmonton on Sunday.