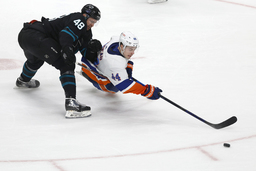 SAN JOSE, Calif. (AP) Logan Couture was the only scorer in the shootout and James Reimer made 44 saves as the San Jose Sharks snapped a seven-game losing streak with a 4-3 win over the New York Islanders on Thursday night.

Couture also scored in regulation as San Jose let two leads slip away in regulation but managed to win for the first time since Jan. 26. Alexander Barabanov and rookie Jasper Weatherby also scored for the Sharks.

"This is the first time I've heard music after the game (in the dressing room) in seven games and I couldn't be happier," Sharks defenseman Jacob Middleton said. "I'm looking to get back in there."

Reimer denied Anthony Beauvillier, Mathew Barzal and Brock Nelson in the shootout. Couture was San Jose's first shooter and beat Ilya Sorokin, who made 25 saves for the Islanders.

"There's not too many things I can say," Islanders coach Barry Trotz said. "It may have been our best game of the year and we didn't get the two points, but we deserved the two points."

Couture gave San Jose a 3-2 lead with his 18th goal late in the second period, but that lead lasted just 19 seconds. The Sharks turned the puck over in the neutral zone and Pelech scored the tying goal on a slap shot that ricocheted off Reimer to make it 3-3.

Nelson gave the Islanders 1-0 lead in the first when he redirected a shot from Scott Mayfield past Reimer with about five minutes remaining in the period.

The Sharks answered when Barabanov scored a power-play goal and Weatherby added a score in a two-minute span for a 2-1 lead after one period.

New York evened the score with about seven minutes left in the second on a goal by Parise, set up by a nice pass from behind the net by Sebastian Aho.

The Islanders' Zdeno Chara played in his 1,652nd career game, breaking the NHL record for games played by a defenseman that was held by Chris Chelios.

"I would like to start by thanking Chris Chelios," Chara said. "He set such a high standard for many of us. . I'm very lucky that I get to still play this game."

Parise's goal was the 400th of his career.

Islanders: At the Los Angeles Kings on Saturday for the third game of a five-game trip.