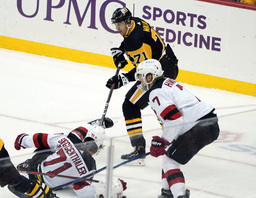 PITTSBURGH (AP) A week ago, the Pittsburgh Penguins were in first place in arguably the NHL's toughest division.

Not so much anymore.

Sidney Crosby and company are sliding, the latest setback a 6-1 loss at home Thursday night to last-place New Jersey, which pounced on the Penguins for three goals in the first seven minutes and cruised.

"We've just got to be better," Crosby said after the Penguins dropped their third straight to slip into third in the Metropolitan Division behind Carolina and the New York Rangers. "We're not playing the way we're capable right now."

Pittsburgh has been outscored 14-5 during its current skid, one in which the Penguins have not led at any point. They've also given up five goals in each of their last five contests at PPG Paints Arena. That's not the kind of hockey that tends to lead to extended playoff runs.

"I think we've got to play the game smarter," Pittsburgh coach Mike Sullivan said. "We can't beat ourselves in certain instances and I think that's been the case the last few games."

The Penguins are still in excellent shape to reach the postseason for a 16th straight season. The injury-ravaged Devils, meanwhile, have been in a three-month tailspin. For a night at least, New Jersey flashed a hint of what might have been as Jesper Bratt scored twice in the first six minutes and rookie Nico Daws made 37 saves.

"Obviously, anytime a team scores as much as we did, it makes it a little easier on the goalie," Daws said. "I thought we all did a great job tonight."

Bratt tapped in a loose puck just 1:16 into the game for his 15th goal of the season and followed with his 16th less than five minutes later to give the Devils a jolt in his return after missing two games with an upper-body injury. Yegor Sharangovich made it 3-0 just 57 seconds after Bratt's second goal and the Devils were firmly in control.

Dawson Mercer, Damon Severson and Nico Hischier also scored for the Devils, who won for just the third time in their last 12 games. Daws withstood a second-period surge by the Penguins to win for the first time since his NHL debut in October.

"It should give (Daws) a lot of confidence," New Jersey coach Lindy Ruff said. "His reads were good. He got there. He was quick. I thought his east-west movement was as good as we've seen this year out of any goaltender. So he has to be pretty happy with himself."

Evgeni Malkin scored his seventh of the season for the Penguins but Tristan Jarry was pulled for the first time in 41 starts this season after Severson's blast from the point made it 5-1 just past the game's midway point.

The All-Star stopped 14 of the 19 shots he faced, though his biggest problem was shoddy defense that provided the Devils with plenty of open looks.

"We gave up some pretty good opportunities," Crosby said. "That's something, we've got to be better defensively as a group and limit those chances."

Two of New Jersey's first three goals came immediately after defensive-zone turnovers. Sullivan called timeout and immediately ripped into his club. The lashing seemed to give his team a lift, but Daws, who came in with a modest .862 save percentage in four appearances, stood his ground.

The German's best work came in the opening half of the second period. Pittsburgh pinned New Jersey in its own end for extended stretched and fired off 10 straight shots. Daws turned aside each one and Mercer made it 4-0 when Hughes forced a turnover by Marcus Pettersson behind the Penguins net and fed Mercer racing in front.

While Malkin's power-play goal briefly gave Pittsburgh life, Severson's blast from the point chased Jarry and the Devils were on their way.

"There's definitely frustration," Penguins defenseman Mike Matheson said. "Our job is to win hockey games and when you're not doing it, it's frustrating."

NOTES: Devils star defenseman Dougie Hamilton played 19:12 in his first game since Jan. 2. ... Penguins forward Jeff Carter was given a double-minor after a high stick to Mercer that left Mercer sprawled on the ice. ... New Jersey went 2 for 5 on the power play. The Penguins were 1 for 4. ... Pettersson appeared to be benched for the second half of the game. He finished with just 8:54 of ice time.