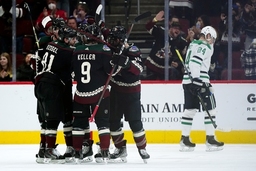 GLENDALE, Ariz. (AP) Nick Schmaltz and Clayton Keller each had a goal and an assist and the Arizona Coyotes stopped Dallas' six-game road winning streak with a 3-1 victory over the Stars on Sunday.

Lawson Crouse scored his 50th NHL goal and Scott Wedgewood made 32 saves for the Coyotes, including 17 while under almost constant pressure in the third period.

The Stars' only goal came midway through the second period, when Roope Hintz tipped a pass that deflected off Arizona defenseman Shayne Gostisbehere's skate and trickled into the net to tie it at 1.

"Honestly, a bad bounce away from a perfect" game, Wedgewood said of the Coyotes' performance.

"Nothing you can do with a tip off the foot and in the back of the net," he added. "Those are the way it is going to go sometimes. From forward to D, we were blocking shots. D-men were boxing out, clearing any rebounds, A lot of communication. Any time I touched the puck, they were talking."

With the game tied at 1, Schmaltz scored on a power play to give the Coyotes a 2-1 lead late in the second period. Keller scored into an open net with 34.7 seconds remaining for Arizona, which had lost its last two games. The Coyotes were never behind, only the seventh time this season that has happened.

Jake Oettinger had 24 saves for the Stars, who had not lost on the road since Jan. 15. Dallas had won four straight and 13 of the last 14 against Arizona.

Wedgewood played his first game since making 38 saves in a 3-2 shootout victory over Colorado on Feb. 1 that stopped the Avalanche's 18-game home winning streak.

"It was exciting to get back out there," said Wedgewood, who missed some time with a concussion around the All-Star break.

Crouse scored the first goal of the game at 10:13 of the second period, flipping a quick wrist shot over Oettinger after Schmaltz took the puck away from a Dallas defender along the left corner boards and sent it out front.

Dallas needed only 57 seconds to tie it, when Hintz was credited with his 22nd goal at 11:10 after Joe Pavelski sent a pass toward the net from the right circle that made it through.

Schmaltz made it 2-1 on the power play goal at 17:05 of the second period, when his wrist shot got through Oettinger's pads after a pass from Keller. Schmaltz has four goals in his last four games.

"When we are moving our feet and making plays, I think we're a pretty good line," said Schmaltz, who skates with Keller and Travis Boyd. "We read off each other really well and I think we all think the game the same way. Just trying to contribute to the team."

Crouse's goal was the Coyotes' first on the power play since Jan. 29, and it broke an 0-for-16 drought that included two power-play opportunities in the first period. The Coyotes also killed both their penalties.

"When we win our special team battle, that gives us a really good chance to win," Arizona coach Andre Tourigny said.

Dallas peppered Wedgewood with five shots in the first 53 seconds of the third period - including one Wedgewood smothered while prone on his back in the crease - but could not break through.

"It was disappointing," Dallas coach Rick Bowness said. "Missed too many scoring opportunities in the third. Could have won that game. Missed an open net. Had some grade-A chances and just didn't capitalize."

Dallas has two goals in its last two games following a 1-0 shootout victory in Chicago on Friday.

"He played a phenomenal game," Stars forward Jason Robertson said. "This is hockey. Goalies get hot."

Oettinger made a quick glove save on Travis Boyd's shot from the crease with four minutes remaining in an uneventful first period, the best scoring chance for either side.

NOTES: Keller, who skates on the Coyotes' top line and on the power play, logged 11 minutes, 23 seconds in a busy first period and finished with 24:46 ice time. He has 17 goals and 21 assists in his last 34 games. ... Arizona F Andrew Ladd suffered a lower body in the first period, leading Tourigny to double-shifted Keller and Schmaltz much of the rest of the way,. ... The Coyotes placed G Carter Hutton on waivers. Hutton started three of the Coyotes' first six games, but had not played since while dealing with a lower body injury. ... Coyotes broadcaster Matt McConnell worked his 1,700th NHL game Sunday. ... Crouse's goal also was his 100th NHL point.