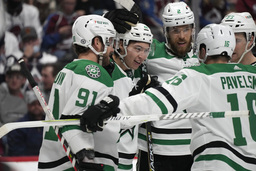 "They're a heck of a team. They've got a lot of great players over there. You need a big team effort," said Pavelski, who also had two assists. "You need to try to keep them to the outside because they have guys that can attack and expose the middle of the ice at times, and at the end you need a great performance out of your goalie."

Colorado's lone goal came from Nathan MacKinnon in the second period with the Stars already up 2-0. Pavel Francouz made 16 saves.

"I thought we created plenty (of) scoring chances to win the hockey game. First period, we gave up some odd-man rushes, which we don't like to do and we shouldn't do. After that, I thought we limited their scoring chances for the most part," Avalanche forward Gabriel Landeskog said. "All in all, it didn't bounce our way tonight."

Two days earlier, the Avalanche won 4-0 at Dallas to extend their record point streak. The Stars nearly returned the favor Tuesday, dropping the Avs to 21-3-2 at home.

"We knew they are fast, especially at home. They are one of the best home teams in the league," Robertson said. "We just tried to manage that intensity, limit their grade As and avoid duplication in our D-zone. We were able to weather the storm and get the win."

"I think it was the best performance I've ever seen from him. Spectacular. It's great to see all his hard work pay off and he really was the key in getting us this win," the Dallas left wing said.

Pavelski took advantage of a power play with 1:36 left in the first period, assisted by Seguin and Robertson.

Robertson was the next to score 4:26 into the second. MacKinnon didn't take long to strike back, scoring 46 seconds later.

Pavelski's second goal came with 7:21 left in the period on another power play, and the insurance goal from Seguin came at 18:37 of the third.

Stars: At the Chicago Blackhawks on Friday.

Avalanche: At the Vegas Golden Knights on Wednesday.