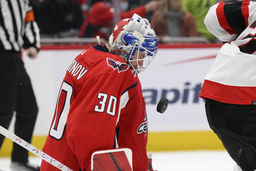 WASHINGTON (AP) Brady Tkachuk scored his team-leading 15th goal and added an assist, Connor Brown also had a goal and an assist and the Ottawa Senators completed a long-awaited 4-1 victory over the Washington Capitals on Sunday.

Alex Formenton and Adam Gaudette added early goals as the Senators jumped to a 2-0 lead after the first period, en route to snapping a 10-game losing skid against the Capitals overall and a nine-game slide in Washington.

"Everybody stepped up. Everybody elevated their game," Tkachuk said of a win that followed two consecutive scoreless defeats. "Obviously we weren't happy with bits and pieces of our last two games."

Nicklas Backstrom scored in the second period for the Capitals, who have now lost five straight in regulation at home and 11 of 17 overall.

"Last couple weeks, we haven't played with the flow that we did earlier," Backstrom said. "I just think that everything needs to be better. I don't know what it is, but I feel like we've just got to relax and try to play our game here."

Ilya Samsonov stopped 22 of the 26 shots he faced for Washington, which is not yet in jeopardy of missing the postseason despite its recent struggles.

The Capitals hold an 11-point lead over Detroit for the second Eastern Conference wild-card payoff berth and are three points back of the New York Rangers for the third automatic berth in the Metropolitan division.

"We're still up and down," said Capitals coach Peter Laviolette. "That's definitely not where we want to be. I think we expect more of ourselves. It's disappointing again, being here in our building in front of our fans. So we've got to be better than that."

Formenton hammered a one-timer of Brown's feed past Samsonov to open the scoring on Ottawa's fourth short-handed goal and Washington's seventh allowed.

The Capitals are now tied with the LA Kings for the second-most short-handed goals conceded.

"That's something that has happened way too many times this year," Backstrom said.

The Senators went a sixth consecutive game without scoring on the power play (14 opportunities), this time despite playing a total of 1:50 of 5-on-3 hockey across two separate chances.

It's Ottawa's longest such drought in terms of games this season.

Senators: RW Austin Watson served the first half of a two-game suspension issued for his hit on Boston defenseman Jack Ahcan, which resulted in an interference minor in Saturday's 2-0 loss to the Bruins. ... Brown recorded his 200th and 201st career points. ... RW Parker Kelly was recalled from AHL Belleville before the game and played on the fourth line.

Capitals: RW Tom Wilson received a 5-minute fighting major for grappling with Ottawa C Nick Paul after he leveled D Thomas Chabot behind the Ottawa goal. ... LW Alex Ovechkin picked up his 31st assist on Backstrom's goal and is on pace to reach the 50-assist threshold for the first time since the 2010-11 season. ... Ovechkin has gone eight games since adding to his team-leading total of 29 goals.