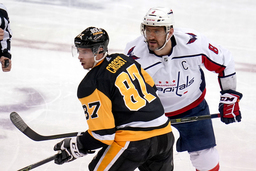 PITTSBURGH (AP) Dmitry Orlov scored his second goal of the game in the final minute of overtime to give the Washington Capitals a 4-3 win over the Pittsburgh Penguins on Tuesday night.

Orlov scored at 4:17 of OT, beating goaltender Tristan Jarry on the blocker side with a wrist shot.

"The first half of the game, I think (Pittsburgh) was a little better," Orlov said. "Then, we kind of found a way. They outshot us, but in the second half, it was much better."

Nic Dowd scored a short-handed goal, and Daniel Sprong added a goal for the Capitals, who won their second straight game. Washington has won five of its last nine games.

Ilya Samsonov made 43 saves for the Capitals. Samsonov replaced starter Vitek Vanecek, who left in the first period with an upper-body injury shortly after a collision with Penguins' forward Kasperi Kapanen. Samsonov denied Sidney Crosby his 499th career goal, stopping a breakaway in overtime.

"(Samsonov) played really well," Capitals' coach Peter Laviolette said. "He had a lot of work. (Pittsburgh) had a lot of offense and came at us in waves at times. For him to come off the bench and play that way, he played a solid game and gave us a chance."

Pittsburgh scored three power-play goals. Bryan Rust had two and Evgeni Malkin one. Jake Guentzel had three assists and Crosby two. Jarry made 28 saves for the Penguins, who lost four straight games for the first time this season.

The Penguins have 17 power-play goals in their last 16 games. Pittsburgh has scored with the man advantage in eight of its last nine games overall.

"I thought it was the best game we played in a while," Penguins' coach Mike Sullivan said. "It's unfortunate we didn't get the result. For the most part, we liked our team game."

Dowd opened the scoring at 5:50 of the first period with the Capitals' sixth short-handed goal of the season. Malkin responded 36 seconds later with a power-play goal to tie the game.

Dowd beat Jarry on a breakaway following a turnover by Kris Letang at the offensive blue line, and Malkin scored on a pass from Guentzel. Malkin ended a streak of five straight games without a first-period goal for Pittsburgh.

Rust gave the Penguins a 2-1 lead at 11:26 of the first period with Pittsburgh's second power-play goal. Malkin kept the puck in at the right point, allowing Rust to beat an out-of-position Samsonov for the goal.

Orlov tied the game for the Capitals with a power-play goal at 16:13 of the first.

The Penguins opened the second period with a 14-0 advantage in shots and a Rust power-play goal at 4:44. Crosby's initial shot hit the post, but Rust stuffed the puck across the line from the side of the net. Rust has 12 goals and 23 points in his last 12 games.

Dowd appeared to tie it for Washington on the Capitals' first shot of the period. Pittsburgh used its challenge and the goal was overturned because of goaltender interference.

The game was tied at 3-all heading into the third following Sprong's goal at 19:18 of the second.

"We had to fight and claw for everything," Laviolette said. "I give the guys a lot of credit for just staying with it."

Crosby and Alex Ovechkin, one of the league's longest-standing rivalries, met for the 61st time in the regular season.

Crosby and Ovechkin rank first in points against the Capitals and Penguins, respectively, among all active players. Crosby surpassed Guy Lafleur for 10th-most points against Washington all-time. He has seven goals and 16 points in his last 10 games. Ovechkin went without a point for the fourth straight game, a season-high.

"He's hard to shut down," Sullivan said. "Without a doubt, he's one of the greatest goal scorers of all-time."

Ovechkin is one goal from reaching the 30-goal plateau for the 16th time in his NHL career. Ovechkin trails only Mike Gartner (17) for most 30-goal seasons in NHL history.

Malkin continued his season-long nine-game point streak. It's the second-longest active point streak in the league behind Minnesota's Kevin Fiala and the third-longest by a Penguins player this season. It's also Malkin's 11th career point streak of nine-plus games, third-most among active players behind only Ovechkin and Crosby.

Malkin has five goals and 13 points since making his season debut on Jan. 11. He has points in all seven home games this season and points in 16 of his last 18 home games dating to last season.

Malkin's 24 goals and 70 points against the Capitals are second-most among active players behind Crosby.

Capitals: Host Edmonton on Wednesday, the Capitals' final game before the All-Star break.

Penguins: The Penguins are off until Tuesday, Feb. 8, when they start a three-game road trip at Boston.