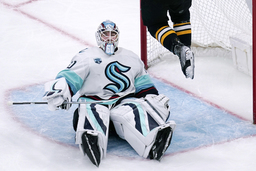 The Bruins winger scored twice, including a tiebreaking power-play goal in the third period, to lift Boston to a 3-2 win over the Seattle Kraken on Tuesday night.

He now has 14 goals since the start of the new year, including four game-winners.

"It's just getting a little bit lucky. I've just been working hard," Pastrnak said. "I haven't changed much, honestly."

Taylor Hall added a goal and an assist to help Bruins win for the second time in three games heading into the All-Star break. Linus Ullmark had 25 saves.

But Bruins coach Bruce Cassidy said he was disappointed with his team's energy after surrendering a two-goal lead in the third period for the second time in four games.

Joonas Donskoi and Mason Appleton scored for Seattle, which has lost two straight - both by a goal. Chris Driedger stopped 23 of 26 shots for Seattle is his first game since entering the COVID-19 protocol in mid-January.

"Another one-goal loss." Donskoi said. "Tight game, but it's frustrating."

Down 2-0, the Kraken came out firing in the final period, needing just 42 seconds to trim the gap to a goal when Donskoi flipped in a sliding wrist shot for his first goal of the season off assists from Ryan Donato and Alex Wennberg.

Seattle then tied it up with 12:30 to play when Appleton had his shot from the point deflected into the net off assists from Adam Larsson and Colin Blackwell.

Seattle had to pull back its attack about three minutes later when Mark Giordano went to the box for tripping Steven Fogarty.

Boston took advantage on the power play and Pastrnak's long shot from the circle found its way past Driedger to put the Bruins back in front.

The Bruins didn't have a chance at a power play until the 18:22 mark of the second period.

Yanni Gourde checked Urho Vaakanainen hard from behind and pushed him into the end boards behind the Boston net, slamming his head into the glass. The impact sent the Bruins defenseman down in a heap.

He got up after a few minutes bleeding and holding a towel to his face has he skated off the ice. He did not return. Cassidy said after the game that Vaakanainen was screened for a concussion.

It was initially called a five-minute major before being downgraded to a boarding minor after a review of the play. Boston came up empty on that opportunity.

But with just under 11 minutes to play and Seattle's Marcus Johansson in the penalty box for tripping, Taylor Hall weaved through traffic and passed to Brad Marchand. He then fed it to Pastrnak, whose slap shot from the left circle deflected off a skate and into the net to put the Bruins in front 1-0.

Hall stayed alert and it paid off for him late in the second period when Seattle's Riley Sheahan had trouble steadying the puck in front of the Kraken net. Hall was able to sneak his stick in for the takeaway and flipped in a snap shot past Driedger to make it 2-0.

Hall said he wants to prove to Cassidy in the second half of the season that the can be contribute more.

"I believe I have another level to get to as a two-way player. Hopefully after the (All-Star) break I can get to that," Hall said. "When the situation arises, I know I can make plays and I can add a lot of value on those plays."

Bruins goaltender Tuukka Rask will spend the All-Star break continuing to rest a lower-body injury that coach Bruce Cassidy said is related to his offseason hip surgery and is not a new ailment. Rask hasn't played since Jan. 24. He is 2-2 in four games, giving up 14 goals with 76 saves.

Kraken: At Islanders on Wednesday in their final game before All-Star break.