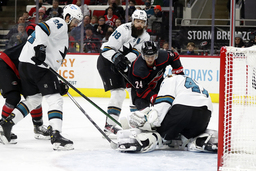 RALEIGH, N.C. (AP) Andrei Svechnikov scored on a rebound with 3:44 remaining to lift the Carolina Hurricanes to a 2-1 victory over the San Jose Sharks on Sunday.

Svechnikov is making it a habit to be the difference-maker for the Hurricanes. In the last three games, he has recorded a shootout-deciding goal and two game-winning goals.

"Lucky bounce for me and I just put it in the net," Svechnikov said of his latest winner, which he got when he collected the puck off a shot by Brett Pesce. It was his 16th goal of the season and seventh goal of the month.

"It's one of the better games that I felt like we played," Hurricanes coach Rod Brind'Amour said. "We didn't get frustrated and we stuck to what we wanted to do."

Rudolfs Balcers scored early in the third period for the Sharks, who are in a 1-3-1 stretch that matches the team's worst five-game span of the season. James Reimer made 27 saves for San Jose.

"We defended really well," Reimer said. "They just got a bounce at the end of the game. They just got the last bounce."

"It's just exactly the way they draw it up," he said.

Trocheck posted his 11th goal of the season just 4:36 into the game. The Hurricanes turned San Jose's neutral-zone turnover into an early lead, with Trocheck firing a shot from inside the blue line.

The Sharks pulled even 3:36 into the third period when Balcers converted. He has scored in three of the past four games in which he has played.

San Jose will play in its final game prior to the All-Star break Tuesday at Tampa Bay - its third game in a row against the three Eastern Conference teams with the most points.

"We played pretty well," Sharks center Andrew Cogliano said. "It hurts. You play as good as you can and you get no points out of the game."

Reimer is San Jose's top goalie, but coupled with Saturday's 5-4 loss at Florida, this marked the first time he has played on back-to-back days this season.

"That's why you train all summer, so you can be ready for this," he said.

Sunday was Carolina's first game after the midway mark of its schedule. The Hurricanes set a franchise record with 62 points in the first 41 games entering Sunday.

"We've just got to keep doing that and always getting better every day," Svechnikov said.

Reimer played for Carolina for two seasons, with 22 appearances last season and 25 appearances in 2019-20. Sunday was his 25th game of the season with the Sharks.

In December, another of Carolina's goalies from last season, Alex Nedeljkovic, was back in the building with Detroit. He, too, was pinned with a loss that night.

When Petr Mrazek came to Carolina with the Toronto Maple Leafs in October, he didn't play. Mrazek was the Hurricanes' top goalie for stretches of the past two seasons. It's possible Mrazek could be in the net when the teams meet in the first game following the All-Star break, as he has returned to action following a long layoff.

Until Svechnikov's goal, Carolina was in danger of not scoring in the second or third period for the second day in a row. Both goals Saturday in a 2-1 win over New Jersey came in the first period. So, three of the last four goals for the Hurricanes have been recorded in first periods following a two-game stretch with no first-period goals.

Sharks: At Tampa Bay on Tuesday.

Hurricanes: Off until a Feb. 7 makeup game at Toronto.