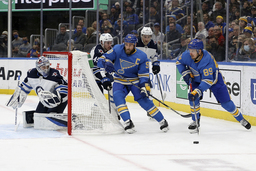 "It wasn't too fun losing those games," Jets forward Pierre-Luc Dubois said. "For us to come in here against a good team and play the right way, I think it could really be a good thing for us."

"I was really happy with the way we played as a group," Schmidt said. "We weren't chasing the game. We let the game come to us, but we also imposed our will a lot of times during the game."

Vladimir Tarasenko scored for St. Louis, and Ville Husso made 20 saves in his first loss in seven starts since returning from a lower body injury Jan. 7. The Blues lost in regulation at home for just the second time in their last 17 games.

"It's definitely not our game," Tararsenko said. "I think we've played very well lately at home. I don't know what it is. Some days are like this."

Connor scored his team-leading 24th goal off a pass from Pierre-Luc Dubois 7:57 into the second period to put the Jets up 2-1. Schmidt made it 3-1 almost five minutes later when he scored with Tarasenko in the penalty box. Winnipeg held St. Louis to two shots in the second period.

"Anytime you can hold a team to two shots, you're going to look at the reasons behind it," Jets coach Dave Lowry said. "We kept things out and when we got extended a couple times we bent a couple times, we didn't break."

Stastny added an empty-net goal with 3:35 remaining for his second goal of the game and 11th of the season.

Tarasenko buried a feed from Brayden Schenn on a power play for his 15th goal of the season 6:08 into the first period to put St. Louis up 1-0. It was Tarasenko's first goal since scoring in the Winter Classic Jan. 1 at Minnesota and made him the fifth Blues player with at least 15 goals this season, joining Brandon Saad, Pavel Buchnevich, Jordan Kyrou and Ivan Barbashev.

"I don't think we had the intensity we needed to beat a good team," Schenn said. "I think we didn't move our feet enough, didn't take care of the puck enough, and ultimately fell behind and weren't able to grab it back."

Stastny intercepted a failed clearing attempt by Husso and backhanded the puck into the empty net for his 10th goal of the season with 5:37 remaining in the first period.

Jets: At Philadelphia ON Tuesday night.