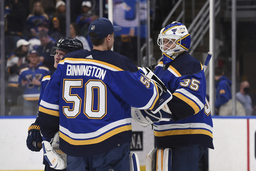 ST. LOUIS (AP) Brandon Saad scored twice and had an assist, Ville Husso made 28 saves to win his sixth consecutive start, and the St. Louis Blues cruised to a 5-1 victory over the Calgary Flames on Thursday night.

Saad's two goals give him 15 for the season, matching his total from last season.

"For me, it's just focusing on every game and bringing my best and when pucks are going in, that obviously feels good," Saad said. "But at the same time, I want to be a complete player."

Brayden Schenn had a goal and an assist, and Jordan Kyrou and Ryan O'Reilly also scored for St. Louis.

"I thought everybody did a great job tonight," Blues coach Craig Berube said. "Everybody up front. Back end I thought was really good. I thought our back end was hard to play against. They broke pucks out, they did a good job, making plays, composure plays. But it was a team effort."

The Blues got some revenge for a blowout loss at Calgary three days earlier. The Flames outshot the Blues 48-21 in their 7-1 victory over the Blues on Monday.

"Too many mistakes," Saad said about that game. "We didn't have our brains on that game and obviously they capitalized on a lot of chances."

"That's a veteran good hockey club," Sutter said. "They had a one-off in Calgary. They're on a pace for something like 110, 115 points this season. You make mistakes, they'll make you pay. You give up three goals going into the third period, you don't win many hockey games. It's very simple."

Husso, who made his fourth start in five games, has won all six of his starts since returning from a lower-body injury on Jan. 7. He has played in five consecutive games; he came in relief of Jordan Binnington for the third period in Monday's game.

Mikael Backlund scored the lone goal for Calgary, which had 29 shots a day after a 6-0 win at Columbus during which the Flames had a franchise-record 62 shots - the highest total in a regulation NHL game since March 1989.

"It was a different team, a better team, for sure," said Matthew Thachuk, a St. Louis native who earned a career-high five assists against the Blues on Monday. "It wasn't even close. I think a lot of it was on us to be honest. Just not our best tonight. It's a matter of a team that got embarrassed in Calgary and wanted to play way better. Our whole team got outplayed tonight."

St. Louis struck first when Saad scored at 6:15 of the opening period.

Calgary tied it at 1 when Backlund scored from a tough angle at 10:34.

St. Louis responded by scoring the go-ahead goal at 13:59. Schenn got the puck near the red line from Niko Mikkola and raced up the ice, scoring in the upper right corner of the net.

'We had a good first period," Berube said. "That was a big key to the win, I think."

Responding well against Calgary was a matter of pride, Schenn said.

"You don't like losing like that and you always kind of put those losses in the back of your mind against the teams that beat you that bad," Schenn said. "Just happened to be three days later that we get another chance at it, so you don't take those losses lightly."

Saad's second goal gave St. Louis a 3-1 lead at 9:57 in the second. The puck came off a Flames stick from behind the net and Saad, in the slot, quickly popped it in.

St. Louis scored twice in the third period. From behind the net, Robert Thomas found Kyrou in front of the net. Kyrou scored at 4:10 for a 4-1 lead. Kyrou has seven goals and seven assists over his last 11 games.

"They took charge of the game," Sutter said. "Their coaching staff did a really good job."

Blues Tyler Bozak appeared in his 800th regular-season game. The 35-year-old Bozak, who's in his 13th season overall, has played 206 games with the Blues since joining as a free agent in 2018. Bozak is one of three active undrafted players to reach that milestone, along with Mark Giordano and Andy Greene. ... The Blues have won five of their six games against Calgary and are 6-2-0 in their last eight against the Flames. ... St. Louis has the NHL's third-best home record at 17-4-2.