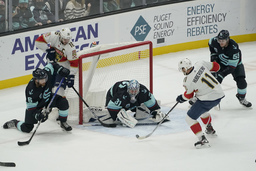 SEATTLE (AP) Maybe the Seattle Kraken need to be more diligent about following their game plan all the time. It's worked twice this season against the Florida Panthers, the top team in the NHL.

Mason Appleton scored his first goal in nearly two months 26 seconds into the third period, Philipp Grubauer made 28 saves, and the Kraken beat the Panthers 5-3 on Sunday night.

"For some reason we stick to the game plan when we played them," Seattle forward Yanni Gourde said. "We don't do that against different teams. But tonight we did. Last time we played them we did. We were confident and we knew what to do against this team."

Marcus Johansson, Gourde and Colin Blackwell all scored during Seattle's three-goal second period, and Calle Jarnkrok added an empty-net goal in the final seconds. The Kraken won for the third time in four games, and Grubauer continued his run of strong performances as two of Florida's goals were bad bounces that ended in the Seattle net.

"That's the biggest thing that I see is being able to just shrug off a goal against and move on to the next save," Seattle coach Dave Hakstol said. "That's been really important."

Seattle swept both games this season against the Panthers, who entered the night tied with Tampa Bay for the most points in the NHL with 61. Seattle beat the Panthers 4-1 on Nov. 27 in Sunrise, Florida, a loss that denied Florida a record-setting 12th consecutive home victory to start the season.

Anthony Duclair, Jonathan Huberdeau and Aleksander Barkov scored for Florida. Sergei Bobrovsky made 24 saves, but saw his five-game win streak in net come to an end.

"We had to chase the game and on the road they are hard games to win when you're chasing the game," Florida interim coach Andrew Brunette said. "We put ourselves in a real tough position."

Appleton provided the game winner with a flick past Bobrovsky in the opening seconds of the third period as Seattle quickly transitioned out of its defensive zone. Appleton had not scored since netting a pair of goals on Nov. 29 in a victory at Buffalo.

Grubauer made 12 saves in the third period including a couple of terrific stops on Duclair and Huberdeau after Florida had pulled Bobrovsky for an extra skater.

"I don't think we deserve to win this game, but I think we had a lot of good chances at the end to to tie the game at least," Barkov said.

Duclair was credited with his 18th goal of the season coming in the first period when his shot was saved by Grubauer but deflected off the skate of Seattle's Carson Soucy and into the Kraken net.

Huberdeau's power-play goal pulled Florida to 3-2 at 12:32 of the second period and less than 90 seconds later, Barkov's shot was deflected by Gourde and fluttered over Grubauer's shoulder to pull the Panthers even at 3-3.

Seattle scored three times in the second period, including two goals 17 seconds apart, the fastest two-goal flurry of Seattle's inaugural season. Johansson pulled Seattle even at 1-1 off a great feed from Mark Giordano at 5:02. The Kraken flubbed a 5-on-3 power play attempt but Gourde's slap shot just after the advantage ended gave Seattle a 2-1 lead.

And 17 seconds after that, Appleton's shot hit the goal post, deflected in the air and off Colin Blackwell's helmet and past Bobrovsky for a 3-1 Kraken lead. It was Blackwell's fourth goal of the season and his most unconventional.

NOTES: Soucy left midway through the first period with a lower body injury and did not return. ... F Sam Bennett returned for Florida after missing the last game in Vancouver. ... F Patric Hornqvist missed his third straight game for the Panthers. ... D Jamie Oleksiak missed his third straight game for Seattle. ... Seattle F Joonas Donskoi was scratched for the first time this season. Donskoi was one of three players to have appeared in each of the first 40 games. Alex Wennberg and Adam Larsson are the only two players to appear in every game for Seattle.

Panthers: At Winnipeg on Tuesday night.