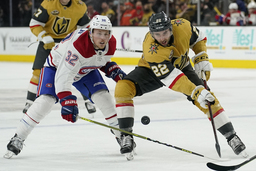 The Golden Knights salvaged the final game of an extended homestand after two road games were postponed due to COVID-19, closing out the stretch 3-3-2 before opening a rugged road trip Monday at Washington.

"We stuck with it and found a way," Vegas coach Peter DeBoer said. "I liked that we didn't panic. Our big guys made plays down the stretch."

Lehner made three huge stops early in the overtime, and Montembeault turned away Karlsson on a breakaway. Theodore grabbed a loose puck off the ensuing faceoff, skated to the slot and beat Montembeault, who it appears will be Montreal's main goalie for an extended period.

Veteran goaltender Carey Price entered the NHL/NHLPA player assistance program for substance-use issues in October and has yet to practice with his teammates this season, while the Canadiens announced Thursday that Jake Allen is expected to miss eight weeks with a lower-body injury.

That leaves 25-year-old Montembeault between the pipes for an already banged-up Canadiens team that has only eight victories this season after arriving in Vegas after a win in Dallas and has yet to post back-to-back wins this season.

"What I like with him is the way he shows up every day, working on his game," Montreal coach Dominque Ducharme said about Montembault. "You can see it's paying off. He comes into the game with a plan. He's getting more and more comfortable within that plan. It's a great opportunity for him."

Montembeault and the Canadiens have their hands full with five more games over a nine-day period before getting nine days off around the All-Star Break.

Meanwhile, an equally injury-riddled Vegas squad now hits the East coast for games in Washington, Carolina, Florida and Tampa Bay, an important four-game swing against teams with a combined 102-35-21 mark.

"We're finding ways to win with seven or eight really key players out of the lineup," Vegas coach Peter DeBoer said. "It was a big win tonight, and everyone helped and contributed to it."

Stephenson, playing in his 300th career game, opened the scoring early in the first period when he one-timed a loose puck in the slot past Montembeault.

Montreal tied it later in the period when Pezzetta skated into the slot and fired the rebound from Artturi Lehkonen's shot past Lehner glove side.

As tempers flared in the second period, Karlsson scored his sixth of the season during a power play, when he took linemate Marchessault's pass, skated down the slot and snapped a backhand off Montembeault's arm and into the net.

It was Montreal's turn with an extra man, when former Golden Knight Nick Suzuki sent a pass from behind the net to Toffoli, who was at the doorstep to slip it by Lehner, making it 2-2 late in the second period. It was Toffoli's second goal in two games after missing 11 games with an injury.

The Canadiens took their first lead of the night when Lehner appeared to briefly lose sight of the puck's whereabouts and was late in reacting to Hoffman's snapper from the left circle that gave Montreal a 3-2 lead early in the third period.

Marchessault reignited the announced crowd of 18,121 with a power-play goal to tie it midway through the period.

NOTES: Golden Knights D Zach Whitecloud was a late scratch with a back injury after warming up pregame. ... Ducharme said new Canadiens GM Kent Hughes saw the players when they went into the dressing room pregame, but hadn't had a chance to address the team or coaching staff yet other than introducing himself. ... Vegas captain Mark Stone entered COVID protocol ahead of Thursday's game. ... Forward Max Pacioretty skated on his own after wrist surgery and is expected to travel with the Golden Knights when they leave Saturday. ... DeBoer said Vegas defenseman Alec Martinez, who participated in the morning skate, is expected to be cleared to play next week.