Mikheyev scores with 3:15 left to lift Leafs past Blues 6-5 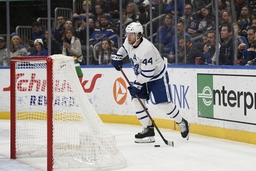 "That's crazy, a roller-coaster ride," Marner said. "Obviously, that's not the game we kind of want to play, but I think we did a great job with just staying with it, making sure we're doing the right things no matter if we gave up the lead, they took it, or anything like that."

"I don't know when's the last time, if ever, when Jack Campbell in a Leafs jersey has given up five in 20 shots," Leafs coach Sheldon Keefe said. "I think it was indicative of how we were playing as a group. I thought we actually played quite well here tonight, even through the third period."

Jordan Binnington made 34 saves for St. Louis, which lost for the first time in regulation at home since Nov. 16 - a stretch during which it was 12-0-1. Ryan O'Reilly scored twice and Niko Mikkola, Robert Thomas and Brandon Saad also had goals for the Blues.

With the game tied at 5, Mikheyev pushed the puck through Binnington's legs for his fifth goal of the season and Toronto held on for the win.

"We did not recognize it right away," Keefe said. "t was a good, long pause, but we found it, and I didn't see the puck at all. But I caught the official pointing at it and then looking at the goaltender's body language kind of told us that it was in."

O'Reilly put a give-and-go from Ivan Barbashev past Campbell to put St. Louis on the board 3:58 into the game.

Bunting tied it 1:45 later when he backhanded a rebound off Matthews' shotoff a faceoff win for his eighth goal.

Marner put Toronto up 2-1 when he stole the puck in the St. Louis zone and roofed it past Binnington for his seventh goal. Tavares scored in an almost identical way to put the Leafs up by two goals 9:27 into the game.

O'Reilly scored his second goal of the game and seventh of the season when he took Mikkola's errant ricochet off the end boards and bounced it off Matthews' skate 3:40 into the second period.

Saad tied it at 3 just 1:40 later when he buried a feed from Thomas past Campbell for his 14th goal of the season.

"I think we were doing a good job, kind of pressuring their D, and our D did a good job of pounding it to the net or giving us an outlet behind the net," Saad said. "We scored a lot of goals, but at the same time we've got to sharpen up defensively to have success."

Liljegren blasted a shot from the point past Binnington for his first NHL goal to put the Leafs back on top.

Thomas tied the game at 4 by burying Jordan Kyrou's backhand pass with 3:47 remaining in the second period.

Kyrou faked a wrap-around attempt and fed Mikkola for his third goal of the season early in the third.

The Leafs tied it again on a power play when Matthews scored his 25th goal of the season with 8:36 remaining.

Blues: Placed LW Pavel Buchnevich on the COVID-19 list. ... C Logan Brown also was scratched because of a non-COVID illness.