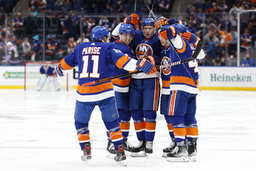 Anthony Beauvillier also scored to help the Islanders get their second straight win at home after opening 0-5-2 at the new $1.1 billion UBS Arena. New York is 3-3-3 over the last nine games, with all the losses coming by a single goal - including one in a shootout.

"It goes without saying, the last little while it's been make or break," Clutterbuck said. "We put ourselves in a tough spot. ... We're just trying to focus on the day in front of us, one day at a time."

Mike Reilly scored and Linus Ullmark had 25 saves for the Bruins, who have lost consecutive games in regulation after a 3-0-2 stretch. Boston was without seven players in COVID-19 protocol - including leading scorers Brad Marchand and Patrice Bergeron - and played a man down with 11 forwards and six defensemen.

"Were we given the option to play? I don't believe so," Bruins coach Bruce Cassidy said. "It was not discussed with me. I was assuming we're playing all along, even with being down one guy. ... We were here to play."

Varlamov came into the game 0-5-1 with a 3.29 goals-against average this season, but had eight saves in the first period, 21 in the second and 11 in the third.

"It feels great," he said. "It's been a long time since I won my last game. First win for me feels amazing, finally. I had a tough stretch but it's over. I'm happy for the team, we get two points today, and I'm happy for myself."

Varlamov made a left pad save to deny Taylor Hall's backhand try on the right doorstep with just over three minutes remaining.

The Bruins pulled Ullmark for an extra skater shortly after that, and Clutterbuck scored his second of the night to make it 3-0 with 2:17 remaining. Reilly then spoiled Varlamov's shutout bid as he beat the goalie into the right corner with 53 seconds left.

The Islanders were 1 for 5 on the power play after coming in 5 for 14 over their previous six games.

"We didn't give up much the first two periods and then we sat back a little bit more than we needed to in the third," New York coach Barry Trotz said. "I thought we had good poise, there wasn't any panic on the bench."

The Islanders went on their second man-advantage of the game when Derek Forbort was called for high-sticking just 6 seconds into the second period. New York scored as Beauvillier got a pass from rookie defenseman Robin Salo and fired a slap shot from the top of the left circle into the top right corner past Ullmark at 1:44 to make it 2-0.

Beauvillier, a healthy scratch against Detroit last Saturday, got his fourth of the season and first since Oct. 30 at Nashville.

"It feels good," Beauvillier said. "Obviously, I have been waiting to find my game lately."

With the Islanders on another power play, Varlamov made a glove save on a shot by Curtis Lazar on the Bruins' best chance up to that point midway through the period. Varlamov also stopped an attempt by Hall with just over eight minutes remaining, and then two tip tries by Jesper Froden over the next 13 seconds, drawing chants of "Var-ly! Var-ly!" from the home crowd.

"I felt they were trying to throw everything at the net and play the rebound," Varlamov said. "My job was to track the puck well and I try not to give up a lot of rebounds."

David Pastrnak had an excellent chance with 4 1/2 minutes left as he skated in on Varlamov and made a forehand-backhand-forehand move, but the goalie made a diving save on the backhand shot to stop the puck before it crossed the line, keeping Boston off the scoreboard.

The Islanders controlled play for much of the first period, outshooting the Bruins 7-2 over the first 11 1/2 minutes.

The Islanders got on the scoreboard with 8:13 remaining in the period. After a scramble for the puck behind the Bruins net, it came out in front and Clutterbuck skated up and fired it into the top right corner for his fourth.

The Islanders were without star C Mathew Barzal due to COVID-19 protocols for the second straight game. Barzal, who has one goal and eight assists during a six-game point streak, is still in Detroit.

The Islanders were 5-2-1 against Boston during last season's division-only schedule, then beat the Bruins in six games in the second round of the playoffs. Prior to last season, the Bruins had won nine of the previous 10 matchups.

Bruins: At Montreal on Saturday night in the second of a three-game trip.

Islanders: Host Vegas on Sunday in the second of a four-game homestand.