Predators down Devils 3-2 behind Saros' 29 saves 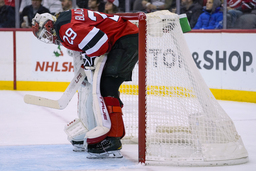 The start was Saros' first after missing the last two games with an undisclosed illness that the team stressed was not COVID-19. Roman Josi and Eeli Tolvanen scored in the second period, and Yakov Trenin added a goal in the third for Nashville, which has won four straight.

"The competitive nature of the group is at a high level," Nashville coach John Hynes said. "We have a lot of guys who are natural competitors, which is something we had talked about, and we find ways to win different games."

New Jersey has lost five of seven, and seven of 10 overall. Mackenzie Blackwood stopped 24 shots, and Pavel Zacha and Yegor Sharangovich scored for the Devils. The Devils outshot Nashville 31-27.

"When you get those opportunities - and we'll grow to learn from not taking advantage of that, or not executing to a top level. Part of that is youth, part of that is some confidence that you can get it done," New Jersey coach Lindy Ruff said. "We just didn't get it done tonight."

The first period ended deadlocked at 0-0, with New Jersey having a slight 6-3 advantage in shots on goal due in part to three power plays.

The Devils broke through just after the midway point of the second period on Zacha's ninth goal of the season. Nico Hischier won a board battle behind the net before pushing the puck to Jesper Bratt, who whipped a pass into the slot that Zacha lasered over Saros' glove.

The lead lasted for a full 2:23, when Josi scored his ninth of the season. New Jersey's earlier failure on the power play came back to haunt the Devils when Tolvanen's man-up goal with about two minutes left sent Nashville into the second intermission with a 2-1 lead.

"I was kind of all alone in the slot," Josi said of his goal. "(I) tried to go low blocker but I think went through his hands a little bit."

Trenin extended Nashville's lead to 3-1 just six minutes into the third with his fifth of the season, and Sharangovich's fourth of the season with 1:05 left ended the scoring.

"Get more pucks to the net," was how Hischier diagnosed what caused the latest Devils loss. "First period we were skating well but we still weren't enough in front of the net. I feel like the goalie saw all the pucks. Clean up that area. We got to get those lucky bounces and it's going to bounce right in front of your stick, so just got to get more in front of the net."

During his pregame availability, Ruff announced goaltender Jonathan Bernier was placed on the injured reserve due to a lingering hip injury.

Ruff said the injury had him "worried and very concerned," for Bernier, who signed a two-year, $8.25 million contract.

Ruff said Bernier will "meet with our doctors and medical staff to try to figure out what the next steps can be."

Nashville recalled Matt Luff from AHL Milwaukee to replace Matt Duchene in the lineup. The team announced during warmups the star center would miss the game with an upper-body injury, and characterized his condition as "day-to-day." ... Goaltender Connor Ingram was reassigned to Milwaukee due to Saros' return to the lineup.