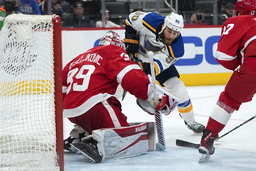 Dylan Larkin, Robby Fabbri and streaking rookie Lucas Raymond also scored for the Red Wings, who snapped a four-game skid and improved their record to 9-9-3.

"This can be a building block," coach Jeff Blashill said. "It's not the mark we're striving for, but this allows us to go out and hopefully put something together."

Making his second straight start, Nedeljkovic turned in several highlight-reel stops - including a sprawling glove save with 13:05 left to preserve a one-goal lead.

"We made the plays - we could have easily had five or six goals, but you just have to take your hat off to (Nedeljkovic)," Blues coach Craig Berube said. "You have games like this, where you throw everything at the net and nothing goes in."

Pavel Buchnevich and David Perron scored for the Blues, who were playing with a full and healthy roster for the first time this season. Perron's goal snapped a 13-game scoreless drought.

It was the sixth loss in eight games for the Blues, who fell to 10-7-2 and are tied for second place in the Central Division.

"We played a really solid game, but we needed to finish some of our chances," forward Jordan Kyrou said. "We were all over them in the offensive zone, but we needed a couple bounces and (Nedeljkovic) played a great game."

Fabbri had two points against his former team, including an empty-net goal to seal the win. It was the first time the Red Wings center faced the Blues since being traded to Detroit on Nov. 6, 2019.

"(Fabbri) is a really passionate person, and I know he wanted to win this game," Blashill said. "I was glad he got rewarded with that empty-netter."

The Blues opened the scoring with a power-play goal from Buchnevich, who sent a one-timer on a pass from Kyrou past Nedeljkovic midway through the first period.

Raymond, who leads NHL rookies in scoring, tied it a few minutes later with a breakaway goal for his team-leading 20th point and 11th in the past 11 games.

"As the road trip went along, (Raymond) was starting to lose a little steam, so I was curious to see where he was at," Blashill said. "He's smart, he's hard, he's competitive. Those are great qualities to have, and I think it's allowed him to have great success."

The 19-year-old forward, drafted fourth overall in 2020, joined Detroit general manager Steve Yzerman as the only Red Wings teenagers - and the 11th in NHL history - to reach 20 career points in 21 games or fewer.

Larkin got his team-leading 10th goal on Detroit's first shot of the second period to break a 1-all tie at 7:45. It was his sixth goal in his last six games, and he's needed only 17 games to surpass his total of nine goals in 44 games last season.

"He was disappointed in his year last year, and I think he kind of refreshed this summer," Blashill said. "Maybe (last year's) injury, in some ways, was good. He's such a worker, and he has such inner drive. And maybe the injury gave him a chance to sit back and refresh a little bit."

Detroit placed defenseman Troy Stecher on injured reserve and Danny DeKeyser on the COVID-19 protocol list. ... Red Wings defenseman Marc Staal (non-COVID-19 illness) is day-to-day and defenseman Dan Renouf was recalled from Grand Rapids. . Blashill said defenseman Troy Stecher (wrist surgery) and center Mitchell Stephens (lower body) will both be out through the Olympic break. . Blues forward James Neal was held out with an undisclosed injury and Detroit's Joe Veleno exited in the third period with an upper-body injury.

Blues: Visit the Chicago Blackhawks in the first of a back-to-back Saturday.