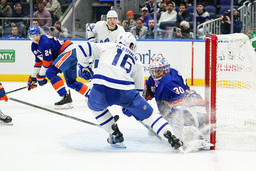 Ondrej Kase also had a goal to help Toronto improve to 11-2 in its last 13 games in the opener of a four-game road trip that includes the next three games in California. Woll, a 2016 third-round draft pick, picked up his second career win in two starts.

"It's great seeing a kid like that get rewarded," Marner said of Woll. "His work ethic is extremely high. He comes in every day with an awesome attitude, he's a great kid to be around."

Ilya Sorokin had 37 saves for the Islanders, who lost their sixth straight game - all in regulation - and remained winless in two at their brand new $1.1 billion UBS Arena next to Belmont Park. New York has been outscored 27-6 during its losing streak.

The undermanned Islanders were without six of their regular skaters due to COVID-19 protocol and second-line center Brock Nelson left the game with a lower-body injury after playing 6:58 in the opening period.

"This isn't what we envisioned coming into this season," Islanders forward Matt Martin said of the team's 5-8-2 start. "We just got to find a way, we got to keep battling, keep grinding and get ourselves out of this thing. It hasn't been ideal, it hasn't been what we wanted but all we have here is each other and we just got to keep pushing forward."

Marner opened the scoring with a short-handed goal at 3:31 of the first period. Maple Leafs defenseman Jake Muzzin's outlet pass off the boards helped Marner get behind Islanders forward Mathew Barzal before converting a breakaway on the backhand.

"When your penalty kill is feeling it, they're confident, they tend to hold onto the puck a little bit longer and sometimes you can catch teams," Maple Leafs coach Sheldon Keefe said. "It was a huge goal for us and more importantly it was a huge kill at an important time of the game."

Kase got his fifth of the season and doubled Toronto's advantage 2 minutes into the third. The 26-year-old forward beat the Islanders' Richard Panik to the slot before hammering a beautiful feed from David Kampf.

Marner extended the Maple Leafs' lead to 3-0 when he buried a feed from Michael Bunting with 6:31 left.

"It was awesome, Woll said following the win. "It's really cool to see how much everyone supports other guys and how much happiness everyone gets from other guys succeeding. It's such a special team win, and it was pretty cool to see the excitement in the room afterwards."

The Islanders failed to capitalize on three power-play opportunities and remain 30th in the NHL on the man advantage. New York was also shut out for the second time this season.

"A lot of times it is execution and effort," Islanders coach Barry Trotz said of the power play. "If one of those two things are failing then you get bad results. ... Tonight we didn't generate much."

The Islanders will play 13 of the next 18 games at UBS Arena to close out the 2021 calendar year after beginning the regular season with a franchise record 13 consecutive away games, second-longest road stretch in NHL history.

Islanders forward Anthony Beauvillier returned to the lineup after an incorrect COVID-19 test kept him out of the lineup Saturday. Kieffer Bellows did not dress after testing positive for COVID-19. The 23-year-old played against the Calgary Flames on Saturday night. Andy Greene, Ross Johnston, Anders Lee and Adam Pelech remained out of the lineup. Josh Bailey remains in Florida after testing positive for COVID-19.