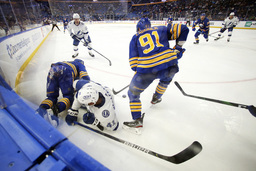 BUFFALO, N.Y. (AP) Victor Olofsson scored two goals and Craig Anderson made 35 saves for the Buffalo Sabres in a 5-1 win against the Tampa Bay Lightning on Monday night.

Robert Hagg had a goal an an assist, Tage Thompson tallied two assists and the Sabres got goals from Drake Caggiula and Vinnie Hinostroza in their first victory over the Lightning in eight meetings.

Bouncing back from a 2-1 overtime loss in their road opener at New Jersey on Saturday, the Sabres continued their strong start by beating the two-time Stanley Cup champions to improve to 4-1-0 at home.

After finishing in last place for the fourth time in eight years, Buffalo is building belief it can compete on a nightly basis, coach Don Granato said.

"We don't have a long body of work on this, so it's still a major work in progress," Granato said. "But tonight, obviously, is one more night of hopeful reassurance that you can do things. And the core guys, the core older guys, really, really are key in that."

The Sabres' oldest player is the 40-year-old Anderson, who has won three of his four starts and boasts a .944 save percentage.

"Craig was phenomenal," Granato said. "He was great. He's a leader."

Alex Killorn had a goal for the Lightning, who opened a back-to-back trip with their first road loss of the season. Brian Elliott stopped 20 shots in his Tampa Bay debut.

"It was frustrating but it just shows you a couple of lapses can cost you a game," Killorn said. "I thought we played well for a majority of the game. We just have to do it for the entirety."

Caggiula bounced in a wrist shot off the far post to beat Elliott on an unassisted breakaway with 38 seconds left in the second, giving the Sabres a 2-1 lead during a period in which they did not have a shot on goal for the first 13 minutes.

The Lightning have yet to lead in regulation this season. They had scored nine third-period goals in their first five games (second in the NHL) and had come back to force overtime three times. But on Monday, the Sabres did all the scoring in the final period.

"Our third-period play wasn't as good as our first two," Killorn said. "I don't know what it was. We're going to have to address it."

Even though his team led after two periods, Granato told the Sabres at intermission that they needed a better effort in the third.

"I didn't like what was transpiring and felt we needed to respond," Granato said. "You certainly have to respect what they have over there. But there's something to giving them too much respect, and that can't happen."

Hinostroza added his first goal with the Sabres in the early stages of the third period, taking the puck from Tampa Bay's Mathieu Joseph and beating Elliott with a wrist shot from the high slot.

"Any time you are going to turn the puck over in the NHL, you are just flirting with fire," Lightning coach Jon Cooper said. "Any time you see two unassisted goals, you probably did something where you gave it to them."

Hagg had an empty-net goal with 5:35 to go, six seconds after the Lightning pulled Elliott for an extra attacker.

Olofsson's goal off the rebound from Thompson's shot put Buffalo ahead less than two minutes into the game. Olofsson added a goal into the empty net with 2:30 remaining for his fourth of the season.

Tampa Bay has fallen behind in the first period of every game this season. The Lightning scored in the opening period for the first time in six games when Killorn got up from his knees to knock in the rebound from Ryan McDonagh's point shot with 1:34 left in the first.

Lightning forward Pat Maroon did not make the trip to Buffalo following the birth of his daughter. ... Alex Barre-Boulet returned to the Tampa Bay lineup after being claimed on waivers from Seattle. He started the season with the Lightning before getting waived and spending 11 days on the Kraken roster.