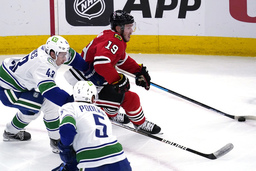 Thatcher Demko made 29 saves and Conor Garland added an empty-netter with 1:02 left to help the Canucks (2-2-1) end a two-game slide. Vancouver scored two goals in the second period to take the lead for good in the fifth of a six-game road trip, its longest to start a season in team history.

Coach Travis Green thought his team was solid on both sides of the puck as the Canucks rebounded from a 5-2 loss in Buffalo on Tuesday and limited Chicago's scoring chances.

"That was a good hockey game," Green said. "Not a lot of mistakes by our group. I thought we managed the puck well."

Demko faced a smattering of tough shots, but almost no rebounds or attempts that forced him to scramble.

"We sustained out style of play for a full 60 (minutes)," Demko said. "We did a good job in our zone making sure our bases were checked."

Alex DeBrincat scored a power-play goal for sputtering Chicago, which dropped to 0-4-1. Kevin Lankinen was sharp in stopping 21 shots, but the Blackhawks again failed to cash in offensively despite outshooting the Canucks 30-25.

The Blackhawks have been outscored 21-9 this season and haven't led in any of their five games.

Dickinson opened the scoring 6:36 into the first period, ripping a one-timer from the left circle over Lankinen's glove into the upper right corner of the net. Dickinson converted Matthew Highmore's pass from behind the net.

DeBrincat's power-play goal about two minutes later tied the game. He also connected on a one-timer from the left circle that found the upper right corner - set up by Patrick Kane with a cross-ice feed from the left side.

Pearson scored on a midair deflection of Quinn Hughes' high shot from the blue line at 9:55 of the second period to put Vancouver ahead 2-1.

Camped in front of the net and covered by Chicago's Calvin de Haan, Pearson redirected the puck downward and under Lankinen's glove as the Canucks capped a dominant shift.

"We're a team that has to go to hard places if we want to win," Green said.

Boeser made it 3-1 with 1:39 left in the second, stuffing in a rebound from the left edge of the crease during a 5-on-3 power play after taking a cross-ice pass from Elias Pettersson. Lankinen slid and made a right-pad save on Boeser's first attempt, but the Canucks forward followed through and popped the puck in.

It was the first power-play goal allowed this season by the Blackhawks after they had killed 10 chances against them.

The Blackhawks saluted Patrick Kane's 1,000th game in a pregame video tribute and on-ice ceremony. Kane played the milestone game back on March 9 in Dallas, but wanted to wait to celebrate it in front of a full crowd at the United Center.

Kane was joined by his family - including his girlfriend and infant son, Patrick Kane III - and received a silver stick from Blackhawks captain Jonathan Toews. The two stars broke into the NHL with Chicago in 2007 and anchored Stanley Cup championship teams in 2010, 2013 and 2015.

Green was behind the bench for his 294th regular-season game with the Canucks, tying him with Bob McCammon for the fourth-most games coached in franchise history.

Canucks: Conclude their six-game trip Saturday at Seattle, which will be the first home game for the Kraken.