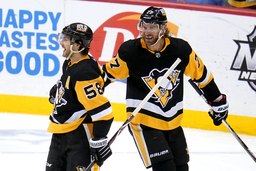 The Seattle Kraken's nickname does not mean sacrificial lamb in some obscure language, and the Pittsburgh Penguins probably shouldn't assume it does.

But it sure looks like a mismatch on paper when the Penguins will host the expansion club on Thursday night.

Pittsburgh has won six straight games and 17 of its past 19 and trails the first-place New York Rangers by only one point in the Metropolitan Division.

The Penguins shored up some defensive concerns during Tuesday's 6-3 win against the Arizona Coyotes.

"We've had a lot of track meets the last handful of games," Pittsburgh forward Evan Rodrigues said. "And I think (Tuesday) we were a lot better defensively. ... We played the right way for 60 minutes. A lot better than it has been."

Which means Seattle could face a skilled club that is not only winning but is steeped in confidence. More to the point, a club that is starting to gather buzz as a candidate to make a long playoff run.

"The expectations inside our locker room are extremely high, and so there's never a sense of satisfaction," Pittsburgh coach Mike Sullivan said. "We're always hungry for more."

And that's with a franchise trying to find its footing coming to town.

The Penguins breezed to a 6-1 win over the Kraken in Seattle on Dec. 6.

Seattle is coming off a 4-2 loss Tuesday against the Nashville Predators, a result that capped a 3-3-0 homestand. That's progress, considering it accounts for nearly a quarter of the team's 13 wins.

"I really like the formula that we've had through this homestand, and the purpose that we've played with," Kraken coach Dave Hakstol said.

The feather in the team's cap during the homestand was Sunday's 5-3 win over the red-hot Florida Panthers.

The Kraken have shown signs of building chemistry.

"It takes everyone for this team to win a hockey game. ... That's what we've got to bring every single night," Kraken forward Yanni Gourde said.

Hakstol credited the play of his team despite the result.

"We played our tails off; we played a good hockey game," he said. "Mistakes happen throughout the game, but overall, we gave up a little on speed early in this game and shut that down and shut down the middle of the rink. We generated good opportunities, building a lead in the first and building that lead again in the second. I really liked the way our team played."

Hakstol tipped his hand that Philipp Grubauer likely will start in goal against the Penguins. The coach noted that Grubauer's 23-save performance Tuesday was "not at his best. He'll need to be better in Pittsburgh."