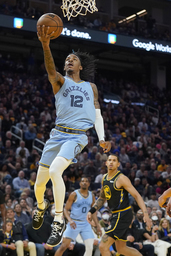 Morant agreed to a five-year supermax rookie extension Friday. Tandem, the company home to Morant's agent, Jim Tanner, congratulated the guard on the contract on social media minutes after extensions could be signed.

"Memphis is my home," Morant wrote on Twitter six minutes after midnight.

This extension was merely a formality for the point guard voted the NBA's Most Improved Player in his third season and who also finished seventh in voting for league MVP.

The deal is worth at least $193 million and potentially up to $231 million. It's the largest contract the Grizzlies have ever handed out, topping the max contract of $153 million Mike Conley received in 2016.

General manager Zach Kleiman made clear the Grizzlies would be keeping Morant while trying to avoid violating NBA rules and the CBA a couple days after Memphis lost the Western Conference semifinals to the eventual NBA champion Golden State Warriors.

The No. 2 overall pick in the 2019 draft is coming off his best season yet. The 2020 Rookie of the Year became an All-Star starter this season and also finished on the All-NBA's second team, making him eligible for a maximum contract extension this offseason.

He became the first player in NBA history to win both Rookie of the Year and Most Improved Player, and the first Grizzlies player to win the latter award. Morant dropped that award at the home of teammate Desmond Bane, who finished fifth, ahead of Jaren Jackson Jr. at 10th.

Morant set career bests in scoring (27.4 points per game), rebounds (5.7), steals (1.2) and field-goal shooting (49.3%). His scoring average last season was 19.1 per game, and he made the big jump while playing basically the same amount of minutes to help Memphis tie the franchise record with 56 wins and the NBA's second-best record.

The Grizzlies finished with the No. 2 seed in the Western Conference and beat Minnesota in six games for their first playoff series victory since 2015. Memphis went 20-5 during the regular season in games Morant missed because of injuries.

A bone bruise in his right knee kept Morant from playing the final three games of Memphis' semifinals series with Golden State, which the Grizzlies lost in six games.