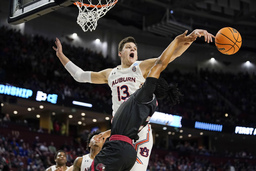 In their first draft under new president of basketball operations Tim Connelly, the Timberwolves - coming off a 46-win season and just the second playoff appearance of the last 18 years - were active on the trade phones while taking advantage of some depth in the bottom third of the first round to pick up an extra prospect.

The Timberwolves sent the 19th pick plus a future second-rounder to the Grizzlies for the 22nd and 29th selections. Then they packaged No. 29 and two future second-rounders in a deal with Houston to move back up and get Moore at No. 26. The NBA finalized the trades early Friday.

Because the deals were not yet official late Thursday, Connelly was not allowed to comment specifically on Kessler or Moore when he met with reporters at the end of the night.

"I think the guys we got are all big-time pros, and they're about all the right things. The background on these guys is sterling. So anytime you bring that type of professional and that type of competitor in this building, I think we got better," Connelly said.

Kessler, who won two national defensive player of the year awards and was widely considered the best shot-blocker in this draft, came off the board at No. 22. Kessler, who set the NCAA single-season blocks record with 155, transferred to Auburn from North Carolina.

Rebounding is one of Minnesota's biggest needs, with a power forward the most obvious position to add on the roster, but the versatility of Towns also allows him to play the No. 4 spot and play next to the type of traditional center that Kessler could be. For now, Kessler, the only player in the nation who had multiple triple-doubles this season, is probably best suited to coming off the bench in a limited role as he adjusts to the pros.

The Wolves, the person said, sent No. 29 to Houston in another swap for No. 26 that originally belonged to Dallas. That's where Moore went. The 6-foot-5 wing, who was the second-leading scorer on a Duke team that was loaded with future pros and reached the Final Four, flourished in his third season. He was an ACC All-Defensive Team pick.

"There's some pieces we got this evening that have the ability to impact the game in ways that we presently don't have on our roster. I think that's fair, but we have a really good team, and the guys that we took this evening are going to be behind really good players, and those guys are going to have to work their tails off to get on the court," Connelly said. "What I hope is in two, three years, when we're talking about the draft in 2025, the guys we chose this evening are part of our core."

The trades, which also included future second-rounders of the Wolves, were still pending league approval and official announcement by the NBA. They started the night with three second-round picks that were also part of the flurry of trade activity around the league.

The Wolves didn't have any picks in the draft last year, owing both of them to Golden State to complete the trade that landed D'Angelo Russell and sent Andrew Wiggins to the Warriors in 2020.

The Wolves have embarked on yet another era of leadership in their front office, this time under Connelly after luring him east with a lucrative contract following a well-regarded nine-year run with the Denver Nuggets. Connelly has since loaded up with lieutenants, hiring former New Orleans Pelicans general manager Dell Demps and former Orlando Magic executive Matt Lloyd and retaining executive vice president Sachin Gupta.

Connelly has referred to himself as just "a scout at heart with an elevated title," but the moves the Wolves make this summer and next will go a long way toward shaping his legacy with an on-the-rise team that finished seventh in the Western Conference this season. With the 41st overall pick in the second round for the Nuggets in 2014, Connelly directed the franchise-altering selection of Serbian center Nikola Jokic - now a two-time NBA MVP.

The most critical decision of Connelly's first year will probably come after the draft, since few No. 19 picks are expected to or capable of significant impacts on playoff teams.

Russell is about to enter the final year of his contract, carrying a salary cap hit of more than $31 million, and he has not established the consistency and reliability demanded of a max player. Russell was benched in the fourth quarter in favor of Jordan McLaughlin at point guard in the final game of Minnesota's first-round series against the Memphis Grizzlies.

The Wolves will also be eligible to offer Towns a max extension this summer.