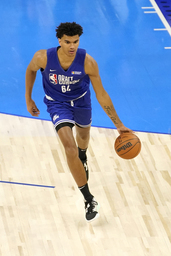 Dominick Barlow received on-the-job training - and a six-figure salary - to skip college and join Overtime Elite, a new basketball league created to give high school players another path to the pros. He learned about nutrition, social-media skills and financial literacy as he immersed himself in hoops.

He has parlayed his time with OTE into an invitation to the NBA draft combine this week in Chicago.

For the league, it demonstrates there's room for yet another option beyond the conventional route through the college ranks, the NBA's G League Ignite or playing overseas.

"This just shows how big this industry is," said Jay Bilas, a basketball analyst for ESPN. "There's not just one way to be successful and have a productive and long career."

There were almost as many OTE players (Barlow and guard Jean Montero) invited to the combine as from Kansas, the NCAA champion (Ochai Agbaji, Christian Braun, Jalen Wilson ).

Over the next few days, they will participate in games, drills and go through interviews. It's a chance to possibly move up a team's draft board. Montero and Barlow are both currently forecast as second-round picks (although, some mock drafts have Montero going late in the first ).

Coming out of high school, Barlow wasn't a five-star recruit. He had suitors - DePaul, Illinois and Florida among them, according to Rivals.com - but elected to go with the league that guarantees at least $100,000, along with shares in the company (Overtime) and other revenue streams through sales of custom jerseys, trading cards, video games, and NFTs.

Barlow learned about nutrition and simple lessons like how to balance his plate after a heavy workout. He took a course on media training and on expanding his brand on social media. He also worked with the assistant coaches in practice sessions and was supervised by head coach Kevin Ollie, who guided Connecticut to a national title in 2014.

The 26 players who formed the inaugural OTE class were divided into three teams and played a full schedule against prep schools and each other. The 6-foot-9 Barlow was on Team Overtime, along with Montero, where he averaged 14.8 points. Barlow shot 58.5% from mid-range and 33.9% from 3-point land.

Oftentimes, in front of scouts. Throughout the year, more than 300 pro scouts passed through the complex.

"This put him in position probably much faster than anybody would have imagined," said Brandon Williams, the head of basketball operations at OTE who had stops in the NBA with Golden State, San Antonio and Atlanta. "Much like a flower, you need the proper nutrients to blossom. That's what we were able to do here."

One major thing college basketball does have: Exposure. The television deals and the NCAA Tournament provide a powerful draw even for players who only plan to stick around for one season. There's also burgeoning name, image and likeness opportunities.

"Most basketball fans have no idea who the G League players are until they get drafted. Same thing with Overtime Elite," Bilas said. "The college players you know - Ja Morant or Zion Williamson or whoever. But you can really improve - improve your skill set and your game in the G league or Overtime Elite."

Barlow is attempting to make an even bigger name for himself at the combine. Other players invited include Auburn's Jabari Smith, Duke's Paolo Banchero and Gonzaga's Chet Holmgren - all of whom could be taken No. 1 overall by Orlando. Jaden Hardy is among several players from the NBA G League Ignite, a team based in the San Francisco area that's dedicated to developing top young prospects.

"I do understand that going into the combine, there are some older guys who may be a little bit more physically developed than we are just because we're so young," said Barlow, who would be eligible to return to OTE if he's not drafted. "But I think we're some of the most talented young basketball players in the world."

Barlow has helped set the foundation for what could be big things ahead. In next year's NBA draft, OTE players such as twins Ausar and Amen Thompson are projected to be lottery picks.

"We don't have the history of some of the blueblood schools," Williams said. "We have to embrace that difference. There's this revolutionary group that embraced it as well, that wants to play where it matters. They want to line up against the best talent. You get charged up when you know that you've got to fight."