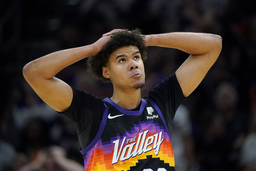 PHOENIX (AP) Chris Paul worked his way around the perimeter and got the shot he wanted on the first offensive possession for the Phoenix Suns - an open 14-foot jumper near the free-throw line that he's made plenty of times during his 17-year NBA career.

It rattled in and out of the basket.

The unwelcome surprises were just beginning for the Suns.

Two hours later, the top-seeded Suns walked off their home floor after a 123-90 loss to the Dallas Mavericks in Game 7 of the Western Conference semifinals that will go down as one of the most embarrassing no-shows in NBA playoff history.

If it's possible, the final score didn't indicate how lopsided the game actually was. The Mavericks led by 46 points at one juncture and the game was never even remotely competitive.

Instead of going back to the NBA Finals, the Suns are left to wonder what went wrong.

"We didn't step up to that challenge today," Suns forward Cameron Johnson said. "I can't tell you enough how much I wish I could rewind the clock a few hours."

It's difficult to know what to make of the Suns' season. Yes, they won a franchise-record 64 games during the regular season. Yes, they had an All-Star backcourt of Paul and Devin Booker. Yes, Monty Williams was the NBA's Coach of the Year. Yes, when they were rolling they were one of the most entertaining teams to watch in the league.

Williams tried to put on a brave face following Game 7.

"We were the best team in the league all season long," Williams said. "We made it to the second round and lost in a game seven. That is no a bad team, we are a really good team. We had an off night. We probably had an inconsistent two weeks if I am directly honest. But I am proud of what we accomplished. These guys are the new standard of Suns basketball.

"That is something to be proud of."

Maybe so. But it's going to take a while for the sting of a Game 7 stinker to wear off before that becomes clear.

Most of the Suns' nucleus is under contract for next season, including Paul, Booker, Mikal Bridges, Johnson and Jae Crowder.

But management has at least one big decision to make: Deandre Ayton's future.

The No. 1 overall pick in 2018 has had an up-and-down four seasons in the NBA. He had a slow start to his career - including a 25-game suspension for violating the league's Anti-Drug program in 2019 - but rebounded to be a key cog in the team's run to the NBA Finals last season.

Now he's a restricted free agent and wants a lucrative long-term contract. It's unclear whether the Suns are willing to give it to him. The next few months should bring some clarity to the situation.

Paul is a 12-time All-Star who has accomplished just about everything in the game except for winning an NBA title.

It's fair to wonder if his best chances are behind him.

He turned 37 years old during the playoffs and was inconsistent during the postseason. Paul made it clear in Sunday's postgame news conference that he's coming back and is still driven to win a championship.

"Every time you lose they are going to say it, it was your best chance," Paul said. "I think for me, for us, we will be right back next year. I will tell you that much. I am not retiring tomorrow. Hopefully I am healthy, come back and keep playing."

One of the Suns' strengths during the regular season was a second unit that sometimes played as good as the first.

That advantage didn't extend to the postseason.

Guard Cameron Payne and center JaVale McGee - stalwarts during the regular season - were essentially benched for big chunks of the Mavericks series. Landry Shamet had some good moments but was inconsistent. Torrey Craig couldn't provide the same clutch minutes that he did during Phoenix's run to the Finals last season.

There's plenty of blame to go around for this year's postseason failure, but there's little doubt changes to that group are coming.