Nets assistant fined for interfering with play vs Wizards 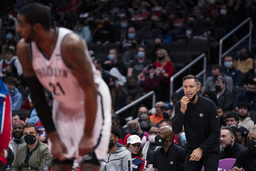 NEW YORK (AP) Brooklyn assistant coach David Vanterpool was fined $10,000 and the Nets were penalized $25,000 by the NBA on Thursday after he interfered with play in a victory at Washington.

Vanterpool reached across the sideline and deflected a pass with 5:42 remaining in the fourth quarter of the Nets' 119-118 victory on Wednesday. The Nets ended up coming up with the ball and were credited with a steal.

Washington's Kyle Kuzma, who was charged with a turnover on the play, was livid and critical of the officials after the game. Referee Ben Taylor said none of the officials saw the deflection on the floor.