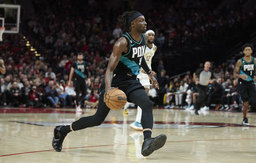 Blazers star Damian Lillard scored 21 points and had six assists in his first game since returning from a calf strain he suffered on Nov. 19. He's missed 12 games so far this season.

"It felt good especially coming off last night. We picked up a big win and I just wanted to encourage the team and bring that energy to get us on a win streak," Lillard said. "I felt normal, I felt good. I think this time it wasn't as bad as the first time."

The win helped Portland sweep a back-to-back set after winning in Utah on Saturday night.

One night after Grant and Simons combined to score 78 points in a win at Utah, Lillard wanted to make sure his return didn't lead to them turning down their own offense.

"Don't let me stop you from being aggressive," Lillard said of Grant and Simons, who combined to score 50 in Sunday's win. "I'm going to have the ball in my hands and I'm going to find opportunities to do what I do. That's what I do."

Myles Turner led the Pacers with 24 points and nine rebounds. Buddy Hield had 22 points in support as the Pacers were without starting point guard Tyrese Haliburton.

Lillard connected on his first field goal attempt - a step back 3-pointer from the corner. With Lillard back in uniform, Portland kept the Pacers at bay for much of the game. Although the Pacers jumped out to an early lead in the first quarter by hitting six of 10 shots, Portland was in control for most of the game.

"I think at the start of the second half we lost some of our principles defensively," Turner said. "We got a little too excited offensively and it hurt our defense. We need to play 48 minutes of basketball."

"If we're really going to win, then it has too be collective," Lillard said. "It's really encouraging for me to see it really unfold."

Lillard picked up his third foul in the second quarter and the Blazers took him out for the final 2:24 of the first half. During Lillard's stint on the bench to close the first half, the Blazers extended their lead to 54-49.

The Pacers showed some grit to start the fourth quarter, cutting the Portland lead to 11 a few times but that was as close as they would get in the final period.

Haliburton missed his first game of the season with a groin injury on Sunday.

Pacers coach Rick Carlisle said he also expects Haliburton to sit out when the Pacers travel to the Bay Area to face off against the Golden State Warriors.