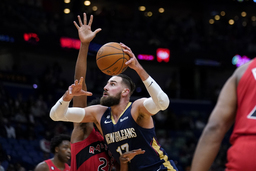 But Williamson, who also had 10 rebounds, iced the game by igniting an 8-0 run over the next 1:27. He blocked a Pascal Siakam layup attempt at one end and finished with a dunk at the other. He then had steals on Toronto's next two possessions, leading to another fast-break dunk and then a put-back layup by Dyson Daniels.

Williamson capped the blitz by rebounding a missed layup and getting a quick put-back as the Pelicans extended their lead to 121-102 with 3:24 left.

"That was a huge moment in the game," Green said. "They had cut it to (11) points, and it was sort of `time, score, situation.' Zion just knew, `All right, I need to take over the game,' and he did it on both ends. We knew that his athletic ability offensively is impressive. But to go up and get some blocks, to grab the rebound and take it full court and get to the basket, get to the foul line - those are things great players do."

"I got the basket, and then it was to sprint back on defense because they were pushing it," Williamson said. "I kind of saw his eyes and went and double-teamed O.G. (Anunoby). I was able to get the steal and make a play. The whole thought process was `make a play.'"

Siakam said Williamson was the difference. "He got whatever he wanted tonight," Siakam said.

Toronto was led by Gary Trent Jr., who scored 35 points, and Siakam with 23.

At 13-8, Pelicans are five games over .500 for the first time since 2017-18. That success has come despite the absence of Brandon Ingram and CJ McCollum.

"When guys go down, we don't look at it as an obstacle for us," Green said. "It's an opportunity to go out and continue to grow as a team, continue to build. We're not there yet, but we'll continue to build toward what we can do."

Raptors: G Fred VanVleet picked up his second technical and went to the locker room 41 seconds into the second half. . Nurse said Siakam's 10-game absence helped the Raptors not be "so heavily reliant" on his 24.1 ppg scoring.

Pelicans: At San Antonio on Friday before returning for four straight at home.