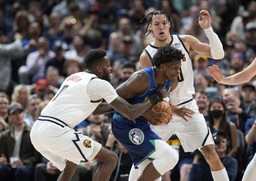 DENVER (AP) The Minnesota Timberwolves are still polishing their playoff credentials and Karl-Anthony Towns gave a sneak peek Friday night of just what type of challenge they'd present in the postseason.

Towns scored 32 points and the Timberwolves overcame Nikola Jokic's 38-point, 19-rebound performance in a 136-130 win over the Denver Nuggets on Friday night.

D'Angelo Russell added 24 points and Anthony Edwards scored half of his 18 points on a trio of clutch 3-pointers in the closing minutes to help the Wolves fend off Denver's comeback, snap a two-game skid and halt the Nuggets' three-game surge up the standings.

"I think we've shown multiple times we're a playoff team and I think we also shown that we're not a joke," Towns said. "This is the real deal Holyfield. Tonight was just another night with the chips all on the table - and for both teams. They even played their MVP 44 minutes.

"I think both teams showed that we were all into winning this game and we both understood the magnitude of this game and the importance. We just came out and found a way to win in their home."

Aaron Gordon scored 24, including a reverse alley-oop dunk, and Monte Morris had 23 for Denver. But what did in the Nuggets were the 36 free throws they allowed and the 30 points they gave up off 18 turnovers.

"We had some stupid turnovers," said Jokic, who finished two assists shy of a triple-double.

The Timberwolves (44-34) still are long shots to avoid a play-in scenario but they gave themselves a shot by taking three of four in the season series with Denver (46-32), which fell a half-game behind Utah in the Northwest Division.

Taurean Prince sank a pair of free throws with 19.8 seconds left after the Nuggets, who trailed by as many as 15, had pulled to 133-130 on Will Barton's 3-pointer, and Edwards added a free throw to cap the scoring.

The Timberwolves took a 70-65 lead into the locker room after Edwards blocked Morris, who bypassed open teammates in both corners to take it to the hoop against two defenders, and Prince scored at the other end.

Before tip-off, Nuggets coach Michael Malone was blunt about how his team has been pulling out games in which they played poorly.

They weren't so fortunate against the Wolves.

The Nuggets have been without stars Jamal Murray (ACL) and Michael Porter Jr. (back surgery) most of the season, but Malone insisted the team hasn't ruled out Murray's return down the stretch.

Asked what he would say to fans pining for Murray, who hasn't played since getting hurt last April 12, Malone said, "Keep hope alive."

"Jamal is getting better every day. Trust me, we all want him back. I want him back. We're a better team with Jamal Murray. And he wants to be back. He's making great progress. But I can't sit here and say that he's going to play in any of the last four games. But I also can't say that he won't."

While Morris said Murray looks ready to return, Jokic said he admonished his star point guard not to rush back.

What about Porter, who appeared to be ahead of Murray in his rehab until a recent setback in his recovery from back surgery?

Timberwolves: G Malik Beasley returned after missing two games with an ankle injury. ... Minnesota was 20 of 22 from the free throw line in the first half. ... The Timberwolves hit 12 of their first 16 shots. ... Towns (6 for 6) and Russell (4 for 4) were perfect from the field in the first quarter and each swished both of their free throws in the opening quarter as well.

Nuggets: F JaMychal Green returned to action after missing two games with a wrist injury. ... Jeff Green raced through the tunnel and out the arena early in the third quarter because of a personal matter. ... Jokic didn't grab his first rebound until the 3:09 mark of the first quarter. ... DeMarcus Cousins picked up four fouls and a technical in just 2 minutes, 6 seconds spanning the first and second quarters.

Timberwolves: Wrap up their road schedule at Houston on Sunday night before finishing with three home games.

Nuggets: Visit the Los Angeles Lakers on Sunday afternoon before finishing up with three home games.