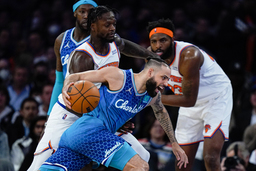 NEW YORK (AP) Miles Bridges scored 14 of his 31 points in the fourth quarter and LaMelo Ball had 20 points and 15 rebounds to help lead the Charlotte Hornets past the New York Knicks 125-114 on Wednesday night.

Kelly Oubre Jr. chipped in 21 points on 8-for-11 shooting, including four 3-pointers. Terry Rozier added 15 points for the Hornets, who have won eight of their last 11 games.

Charlotte improved to 40-37 and clinched a spot in the Eastern Conference play-in tournament.

"This is not where we ultimately want to end up. I'm proud of this group," Hornets coach James Borrego said. "For us to clinch a play-in spot, to be at 40 wins right now . to be in this position speaks volumes to their commitment, their growth, their togetherness, their fight, resiliency."

The victory moved Charlotte with a half-game of idle Brooklyn for the eighth spot in the Eastern Conference play-in race. The Hornets lost to Indiana in the play-in opener last season.

"The goal is to play after the regular season," Oubre said. "For us to get a minor win and clinching a play-in spot is growth, but we have to continue to stay locked in for what's to come."

Evan Fournier scored 30 points, going 6 for 8 from long distance, RJ Barrett added 25, and Julius Randle chipped in 21 for the Knicks, who had their four-game winning halted.

The loss dropped the 11th place Knicks to 34-43, and 5 1/2 games behind the Atlanta for the 10th spot in the East. New York's magic number for elimination is two.

"You're not eliminated until you're eliminated," Knicks coach Tom Thibodeau said.

Charlotte had its 12-point lead in the fourth quarter cut to 109-105 after three-point play from Randle with 3:39 remaining.

Bridges then took over and outscored the Knicks 14-5 over a span of almost three minutes. The Hornets forward hit a 3-pointer and converted a PJ Washington pass for a windmill baseline dunk that made it 114-106. Bridges later followed Fournier's basket with a layup off a pass from Ball, extending the lead to 119-108.

"I just watch great players take over in the fourth quarter all the time, Bron, Kobe, KD, those type of guys. And that is where the real players show up," Bridges said. "You could score as many points as you want in the first, second and third, but once that fourth quarter comes around, every shot matters."

SEE WHAT YOU ARE MISSING

Bridges still holds a grudge against the Knicks for failing to select him in the 2018 draft.

New York chose Kevin Knox II as the ninth overall pick before the Los Angeles Clippers took Bridges 12th and immediately traded him to Charlotte for Shai Gilgeous-Alexander, who had gone a pick earlier.

In 12 career games against the Knicks, Bridges has averaged 15.1 points and 6.3 rebounds.

"So every time I come in, I want to make a point of why they should have drafted me back then," he said. "I don't know, I just try to be aggressive every time I come here and show them what I can do and it's been working out."

Hornets: Charlotte had 39 assists on 49 of their made baskets.