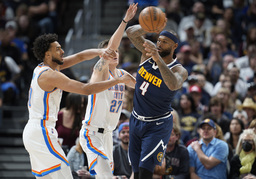 DENVER (AP) Nikola Jokic had 35 points and 12 rebounds to help the Denver Nuggets fend off the scrappy Oklahoma City Thunder 113-107 on Saturday night.

Jokic added eight assists to go with 13-of-15 shooting from the floor and 9 of 10 at the free-throw line. But he pointed to teammate Monte Morris for ensuring the Nuggets were able to evade a huge loss in their quest to avoid the NBA play-in round.

Morris' crucial steal and subsequent 3-pointer in the final minute was the fulcrum of Denver's 10-2 closing run.

"I mean, he won us the game, basically," Jokic said.

Morris has filled in at point guard for Jamal Murray, who's been sidelined since tearing his left ACL last April 12, and Saturday night Morris closed out the game the way Murray can when healthy.

"I think he's played the whole season really good," Jokic said. "I really like having him on my team."

Jokic, the reigning NBA MVP, made all six of his shots from the floor and all six of his free throws in the second half as Denver managed to split the season series with the Thunder 2-2.

Aaron Gordon added 20 points and Will Barton scored 18 for the Nuggets, who blew a 16-point first-half lead before recovering in the final minutes.

"Give Denver credit, they made a couple more plays than we did down the stretch, but I didn't think it was for lack of execution on our part," Thunder coach Mark Daigneault said. "I thought we put ourselves in a position to win on the road against a high-quality team, which is all you can ask for.

"Down the stretch I didn't think that we melted down or anything like that. I thought we got shots and quality plays. We were organized offensively. We forced them to earn it."

"Every time we play them, no matter who plays for them, it's the same story," Malone said.

The Nuggets opened a 16-point lead in the first half and led 58-42 before the Thunder trimmed seven points off their deficit in two trips downcourt.

Aleksej Pokusevski hit a 3-pointer and Tre Mann sank another 3 while getting fouled by a charging Morris. Mann's four-point play made it 58-49 and his 47-foot heave at the halftime buzzer hit the back of the iron.

Oklahoma City is one of the teams that's had a lot of success double- or triple-teaming Jokic with Murray and Michael Porter Jr. (back surgery) sidelined.

In the Thunder's win at Denver earlier this month, Jokic scored 22 points and the rest of the starting lineup managed just 27.

This time, his fellow starters chipped in 53 points to go with his 35.

Thunder: G Shai Gilgeous-Alexander (ankle) was held out. "We're going to have a conversation with him here in the next couple of days to discuss the rest of the year because the game-to-game is not sustainable, in terms of just in, out, on the nightly basis. We're obviously running out of games here," Daigneault said. ... F Josh Giddey is making good progress from his hip injury, Daigneault said, but he's done for the year. ... F Jeremiah Robinson-Earl is expected to return from a foot injury in the next few days. ... F Darius Bazley left in the second quarter with a knee injury and didn't return. Daigneault had no update on him.

Nuggets: After shooting lights-out from behind the arc against the Suns just 48 hours earlier, Denver struggled mightily, going 5 for 19 on 3-pointers in the first half against the Thunder. The starters were 2 of 10 from 3-point range before halftime. The Nuggets finished 8 for 31 from deep.

The Thunder used an 8-0 run to pull to 60-57 in the first two minutes of the third quarter, prompting the Nuggets to call a timeout. During the stoppage, the officials realized Mann's 3-pointer was no good because he'd stepped out of bounds. So when the teams returned to the floor, the Nuggets had a 60-54 cushion.