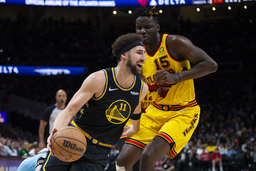 Klay Thompson finished with 37 points, hitting a season-high nine 3-pointers, and Jordan Poole scored 24 for the Warriors, who have dropped four of five. Poole and Thompson each had 22 points in the first half.

Golden State, third in the Western Conference, was coming off a rousing win at Miami on Wednesday before faltering against the Hawks. Atlanta, the No. 10 team in the East, had dropped two of three.

A left corner 3 by Kevin Huerter padded the lead, and Young followed with a straightaway 3 to make it 119-100 and put the game out of reach with 53.7 seconds remaining.

Young's finger-roll gave Atlanta its first double-digit lead at 84-73 midway through the third, and Young followed with a straightaway 3 to make it 98-83 in the closing seconds of the period. Delon Wright's 3-pointer put Atlanta up by 18 entering the fourth.

"The last two minutes (of the second quarter) were kind of a disaster," Golden State coach Steve Kerr said. "We turned the ball over, took some tough shots. They got out in transition, hit some 3s and I thought that carried to the second half.

"They felt more confident and they dominated that third quarter. That was the key stretch. From the two-minute mark of the second and into the third, they took over the game."

Atlanta took charge of the game at the end of the second and throughout the third as they outscored Golden State 43-16, but the Warriors weren't done. They trimmed the lead to five on Gary Payton II's tip-in with 5:37 remaining and to three on Payton's putback with 3:45 left.

That was as close as Golden State would get.

Young had two assists, hit a 3 and knocked down four free throws after the Warriors pulled within three.

"We knew what we needed to do is get stops," Young said. "They went on a run, hit some tough 3s and contested 3s. Late in the game, it comes down to getting stops and executing down the stretch. We did a good job of doing that. Klay hit some tough shots, but it was good to get some stops."

Atlanta, which never trailed in the second half, has won 15 of 18 at home.

"There's still time for us to get that rhythm, get that mojo back and a game like this - coming out with that focus and playing with that attitude that's necessary - we can certainly can get that going," Hawks coach Nate McMillan said.

Thompson's straightaway 3 gave the Warriors their first double-digit lead at 50-39 early in the second. He improved to 5 of 6 on 3s with another straightaway that made it 65-56 at the 2:39 mark of the period, but Atlanta, ending the half on a 13-2 run, got a three-point play from Young in the closing minute to lead 69-67 at intermission.

Second-year Warriors center James Wiseman, the second overall pick of the 2020 draft, is out for the remainder of the season as he recovers from right knee surgery last April.

Wiseman has missed the entire season, but he averaged 17.3 points with 9.7 rebounds and 1.67 blocks in 21 minutes playing three games for the G League Santa Cruz Warriors this month. Kerr said the knee is structurally sound but still has swelling.

Warriors: F Andre Iguodala was listed as questionable Thursday but still missed his 20th straight game with lower back tightness. Kerr said there's a chance he could play in one of the back-to-backs Monday at Washington and Tuesday at Memphis. ... Poole has scored at least 20 points in 12 straight games. ... Curry missed his fourth game in a row and isn't expected to return until the playoffs. ... Jonathan Kuminga started in place of F Kevon Looney, the only Warrior to previously start every game this season.

Hawks: Huerter finished with 20 points. ... C Clint Capela had 19 points and 13 rebounds. ... Gallinari left the game in the fourth and didn't return after sustaining a right elbow contusion. ... Collins is still bothered by a right finger sprain and right foot strain and missed his eighth straight game. There is no timetable for his return. ... Bogdanovic was listed as questionable with right knee soreness. His injury isn't considered serious.

Warriors: At Washington on Sunday.

Hawks: At Indiana on Monday.