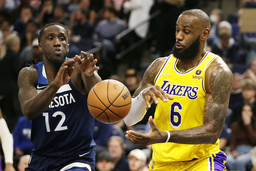 MINNEAPOLIS (AP) The Minnesota Timberwolves have been gobbling up wins against struggling teams, including this one against the uncharacteristically reeling Los Angeles Lakers.

The next stretch for Minnesota, closing in on just the second postseason appearance for the franchise in 18 years, will provide a much tougher test.

Karl-Anthony Towns scored 16 of his 30 points in the fourth quarter to help the Timberwolves beat the Lakers 124-104 on Wednesday night for their ninth win in the last 10 games.

Anthony Edwards had 20 of his 27 points in the second quarter to lead the early surge by the Timberwolves, who never trailed on their way and stayed within 1 1/2 games of Denver for sixth place in the Western Conference.

Their next seven opponents are all in the top seven in either conference, ending with an April 1 road game against the Nuggets.

"We need that right now, a check underneath the hood, if you will," coach Chris Finch said.

Minnesota had a 25-point second-quarter lead whittled to four by the Los Angeles bench in the fourth quarter, but Towns - who had a franchise-record 60 points in the last game - helped the Timberwolves steady themselves. Patrick Beverley pitched 18 points and plenty of pep.

"We made the game competitive. We can't do that. We can't play with our food out there," said Towns, who had 13 of Minnesota's 51 rebounds.

LeBron James, playing through knee soreness, had just 19 points on 8-for-21 shooting to lead the Lakers. He totaled 111 points over the previous three games. The Lakers, who have had Anthony Davis sidelined by a foot injury for the last 11 games, have lost 16 of their last 21 games.

"It's easy to be comfortable when you're winning. I've never been that guy. It's all about, `How comfortable can you be when things become uncomfortable?' I'm OK with that, too," James said. "It's just testing my patience more than any season in the last few years, just because of the way we're playing."

According to ESPN, this is also the first time in James' career that his team has trailed by 25 or more points in three straight games. The Lakers are only one game ahead of 10th-place New Orleans, precariously close to the cut for the play-in tournament.

When Russell Westbrook shot an airball on a 3-pointer with 3:58 left and a 111-94 deficit, Towns ambled over to the baseline where the ball bounced away and, looking at the crowd, put his hand against his forehead as he mockingly pretended to try to find it.

"When you're up, everything's going great. When you're down, they'll kick you," Lakers guard Wayne Ellington said. "So right now, we're being kicked."

The Timberwolves took a 67-46 advantage into the locker room at halftime, but the Lakers made a game of it for a bit. Westbrook froze his follow-through hand in place while posing after a 3-pointer that brought the Lakers within 73-64 with 6:03 left in the third quarter.

D.J. Augustin drained a 3 at the third-quarter buzzer and dropped in a layup early in the fourth quarter to cut the lead to 89-85. Nearly every time the Lakers hit a big shot, though, they followed with a defensive lapse.

The Minnesota bench was trash-talking Westbrook all night.

"Nobody over there has done anything in this league that makes me put my eyes up like, `Oh, they're talking to me. Let me respond,'" Westbrook said. "No, that's fine. They're good. They won a game. Happy for them. Move on to the next one."

Said Finch: "I like the fact that we have confidence, the fact that we play with a lot of emotion. We also have to realize we have to mature a little bit and act like we've been there before."

Lakers: Dwight Howard returned to the starting lineup after missing the last game for family reasons. He had just two points in 16 minutes. ... The Lakers went 0 for 10 in the first quarter and 2 for 21 from 3-point range in the first half.

Timberwolves: This was their 11th victory of the season by 20-plus points, one short of the franchise record set in 2013-14. ... Jayden McDaniels, who sprained his left ankle in the previous game, will miss a minimum of two weeks before re-evaluation ... With McDaniels and Naz Reid (back spasms) out, Nathan Knight had four points and eight rebounds in 14 minutes.

Lakers: At Toronto on Friday night.