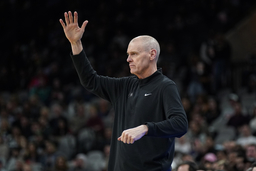 "We knew we had them on a back-to-back," said Pacers forward Isaiah Jackson, who had 15 points. "So, we knew they were going to have a let-up. We just kept our foot on the gas, just kept going."

Indiana ensured there was no repeat of a loss Tuesday night, when it blew a two-point lead in the final 40 seconds against Cleveland.

The Pacers also were short-handed, with Malcolm Brogdan and T.J. McConnell out along with Myles Turner, Ricky Rubio and T.J. Warren.

Indiana had lost 12 of 15 entering the game but responded with a balanced scoring effort.

Pacers guard Duane Washington Jr. had 19 points, all in the first half, Buddy Hield added 17.

"I think we worked hard, but we weren't really that sharp. We didn't shoot very well," Popovich said.

The Pacers led by 19 points in winning their fifth straight in San Antonio.

"Washington is an aggressive player that's fearless and unselfish," Indiana coach Rick Carlisle said. "He gives himself a chance to get going every night."

Spurs closed the first half on a 14-2 run, forcing consecutive turnovers in the final minute. The Pacers eliminated that momentum by opening the second half on a 12-4 run.

"We talked about it at halftime," Carlisle said. "We felt we could get shots and score points against this team. We had gotten a little bit loose defensively and our offense was hurting us in the second quarter. The messaging, the thing we talked about as an entire group was valuing the possession of the ball and doing a better job of protecting the paint."

Pacers: Brogdon's status is day-to-day after suffering a concussion with two minutes remaining in Indiana's three-point loss to Cleveland on Tuesday. . The Pacers' last loss in San Antonio was March 1, 2017. Indiana improved to 20-30 against the Spurs in San Antonio. . F Isaiah Jackson and Spurs center Zach Collins were each issued a technical foul with 7:32 remaining in the first half. Jackson sat on the court after Collins fouled him. It was unclear what occurred, but Jackson sprung from the court and began yelling and pointing at Collins. A technical foul was issued to both for an unsportsmanlike action after a video review.

Spurs: Landale is the first Spurs rookie to score at least 25 points while shooting 80 percent since David Robinson in 1989. . Murray missed the game with a bruised left calf. . Poeltl was out with a sore lower back. . Johnson sat out to rest. . Walker joined Manu Ginobili, Derrick White and Gary Neal as the only players with 300 assists and 200 3-pointers in his first 200 games with the Spurs.

Pacers: At Atlanta on Sunday night.